Review: The Curious Case of the Werewolf That Wasn't, the Mummy That Was, and the Cat in the Jar - Gail Carriger 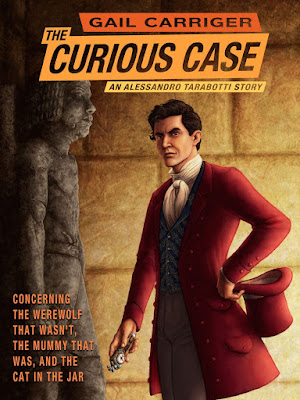 A short tale of mummies, werewolves, and well preserved felines set in the world of the Parasol Protectorate.

Alessandro Tarabotti and his valet, Floote, are on a mission in Egypt when they encounter visiting tourists and things go all pie shaped. What is his real mission and will his Aunt Archangelica approve of his treatment of her cat?

In this short story, New York Times Bestselling Author Gail Carriger uses her comedic voice to delve into the history of one of her most beloved characters. If you have ever wondered about Alexia's father, this will give you a glimpse into his adventures and character. This story was first published in The Book of the Dead, a Jurassic London anthology. 8,300 words.

Parasol Protectorate Series:
The Curious Case of the Werewolf That Wasn't, the Mummy That Was, and the Cat in the Jar (Short Story)
Soulless
Changeless
Blameless
Heartless
Timeless

Review:
The Curious Case of the Werewolf That Wasn't, the Mummy That Was, and the Cat in the Jar is a short story set in the world of Gail Carriger's Parasol Protectorate series that gives readers the chance to meet Alexia's father Alessandro Tarabotti. Although this technically is a prequel I wouldn't recommend it as a starting point if you're new to the series but if you've already read at least Soulless then you'll probably enjoy this glimpse into the past.

I've been wanting to know more about Alessandro's past ever since I first started reading the series so I had high hopes for this story but while it was a fun read I have to admit I think it needed to be longer. At only 32 pages we don't get much of a chance to get to know the characters, it was great to see another side to butler Floote but the length of the story doesn't allow for much character development of Alessandro or anyone else. I was excited when I realised we were witnessing his first meeting with Alexia's mother but it was incredibly brief and didn't even seem to show him being attracted to her so I have no idea how they ended up married which is one of the biggest mysteries of the series!

This story does have all of the humour you'd expect from this author, I liked the Egyptian setting and I did enjoy seeing Alessandro working a case for the Templars but I think it could have been a much more satisfying read if it had been at least double the length.