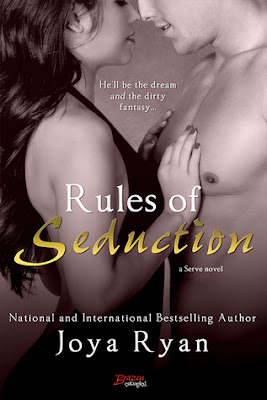 Nolan Hart ensures that Serve's clients get what they want, how they want it. But with one look at the curvy brunette, Nolan knows he’s the man to fulfill her desires. As the anonymous lover, he's Ava’s dirtiest fantasy. Outside of Serve, he's her charming, smartass friend.

But Nolan wants more. More than Ava is willing to give. And as long as the blindfold stays on, she'll never discover that the two men she's falling for are one and the same . . .

Review:
Rules of Seduction is technically the seventh book in the multi-author Serve series but it does work really well as a standalone story and it's Joya Ryan's first contribution to the series. Fans of the previous books will recognise hero Nolan though, he's one of the Doms at Serve and he's in charge of interviewing potential new members and making sure that everything that happens inside the club is safe and consensual. I've always been intrigued by his character so I was really excited when I found out that this would be his story and he was just as sexy as I knew he would be.

Ava is Serve's newest member, she has only just moved to the area and she's looking for something completely anonymous. After escaping from a controlling ex-husband she's determined to live life by her own rules and she'll never let another man have the power to hurt her again. Just because she likes to be dominated in the bedroom doesn't mean she's going to give a man power over the rest of her life and she's completely sworn off men and dating. She is up for anything at the club as long as she's allowed to keep her blindfold on and never finds out who the man is outside of the club setting. Nolan is immediately drawn to Ava and he wants to be the one to fulfil her wildest fantasies, in fact he just can't bring himself to hand her over to one of the club's other Doms. He isn't built for a relationship anyway so what's the harm in being her anonymous partner as long as Ava never finds out it's him? As the passion builds between them in Serve they also start to develop a friendship outside of the club but Ava has no clue that the two men who are both starting to capture a piece of her heart are the same person. When Nolan decides he wants it all can Ava forgive him for his deception?

This was the first book I've read by Joya Ryan but in keeping with the rest of this series it was hot as hell and I actually think Nolan is one of my favourite guys from the series. He is sexy as hell and knows exactly how to give Ava everything she needs. Not only is he very dominant but he's also incredibly caring, very funny, loving and a great friend. I loved that we got to see them getting to know each other outside of the club and it was easy to see the connection between them. This was a fantastic instalment to the series and I'm definitely going to have to check out some of this author's other books in the future!