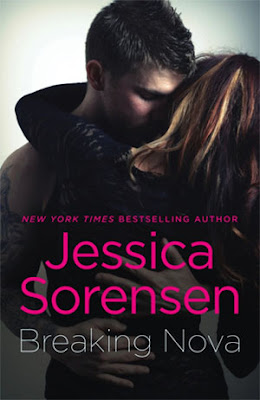 Nova Reed used to have dreams-of becoming a famous drummer, of marrying her true love. But all of that was taken away in an instant. Now she's getting by as best she can, though sometimes that means doing things the old Nova would never do. Things that are slowly eating away at her spirit. Every day blends into the next ... until she meets Quinton Carter. His intense, honey brown eyes instantly draw her in, and he looks just about as broken as she feels inside.

Quinton once got a second chance at life — too bad he doesn't want it. The tattoos on his chest are a constant reminder of what he's done, what he's lost. He's sworn to never allow happiness into his life ... but then beautiful, sweet Nova makes him smile. He knows he's too damaged to get close to her, yet she's the only one who can make him feel alive again. Quinton will have to decide: does he deserve to start over? Or should he pay for his past forever?

Review:
Jessica Sorensen is one of my favourite NA authors, she always creates such realistic characters, ones who are deeply messed up and who don't always deal with their problems in the healthiest ways but that just makes them all the more compelling to read about. Breaking Nova is about two of these damaged people and about one of them learning to move forward with their life. It doesn't really end with a happily ever after but I'm kind of hopeful that these characters will sort themselves out eventually and I'm looking forward to following their journey.

Nova lost the love of her life when he committed suicide and she was traumatised when she found the body. Quinton survived the car crash that killed both his girlfriend and his cousin but because he was the driver he blames himself for what happened and suffers with survivors guilt. They're both in a bad way and have turned to drink and drugs as a way to make the pain stop. I definitely don't agree with a lot of the choices they make but it's easy to understand why they act the way they do. Their lives have been turned upside down and they've got to make the choice to get past what happened so they can find a way to move forward.

I think Breaking Nova was probably the darkest book I've read by Jessica Sorensen but I absolutely loved it. This isn't always an easy book to read, in fact at times it's downright depressing, but I enjoyed seeing Nova make such huge changes in her life. She has had it tough but she has come out on the other side stronger than ever and I was really proud of her. On the other hand Quinton is still heading towards rock bottom, I'm kind of scared to see how much harder things are going to get for him before he manages to pick himself back up but I have confidence that he can do it. What I really appreciated was that the romance between them doesn't automatically solve all their issues, they still have to find a way to deal with the past. Nova has some difficult decisions to make but I really felt like she did the right thing and it was good to see her put herself first for a change.

This was a heart wrenching story that really tugged at my emotions and I can't wait to see these characters continue to turn their lives around.

Source: Received from Sphere in exchange for an honest review