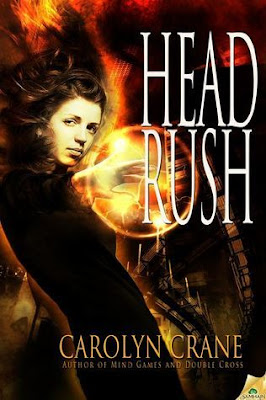 In an attempt to put her unhappy past behind her, Justine Jones throws herself into nursing school and planning her wedding to Otto Sanchez, the man of her dreams. But something is off. Random details aren’t adding up… and is it her imagination, or are her friends and fiancé keeping secrets from her? And what’s with the strange sense of unease, and her odd new headaches?

Justine tries to stay upbeat as Midcity cowers under martial law, sleepwalking cannibals, and a mysterious rash of paranormal copycat violence, but her search for answers leads her into the most dangerous mind game yet.

With the help of unlikely allies, including her paranoid dad and best frenemy Simon, Justine fights her ultimate foe… and unravels the most startling mystery of all.

Review:
Please be aware that although this review will be spoiler free for Head Rush it will contain spoilers for previous books so please don't carry on reading if you're not up to date with the series.

After the horrendous cliffhanger at the end of Double Cross I was incredibly relieved that I didn't have to wait a year for the release of Head Rush and I was able to dive straight into the story to find out what happens next. I just couldn't believe it, after all that time I've spent waiting for Justine to realise that Packard was the one and then Otto goes and has her memory wiped! How could he do that? The complete and utter bastard! I'll admit I was a bit scared when I picked up this book, I really worried that we'd have another whole book of Justine fighting her feelings for Packard and waxing on about how wonderful Otto is. Luckily that isn't quite what happens but you're just going to have to read it for yourself to find out what we get instead.

I've had a bit of a rocky relationship with Justine throughout the series, at first I found her hypochondria quite endearing and I definitely love that she's such a unique character but eventually her inner monologue started to get on my nerves and I spent a fair chunk of both the first two books wanting to shake some sense into her. Luckily she started to improve a lot at the end of Double Cross and I actually found myself liking her all the way through this story. After brutally murdering Avery Otto had Justine's memory revised so that she now believes she watched Packard commit the crime, but even though she saw it with her own two eyes her heart struggles to accept that version of events. Deep down she is certain that Packard could never do something like that and it's left her incredibly confused. Otto has used Justine's vulnerability to talk her into marrying him and with the wedding fast approaching she is going to have to look deep inside herself and try to decide what she really wants from life.

It was really interesting to see the effects the revision had on Justine, she seemed much more vulnerable in this instalment but at the same time she finds an inner strength I wasn't sure she actually had. When she sets her mind to find out the truth she really comes into her own and I found it very easy to root for her. Of course I've loved Packard from the beginning, even when he was being a manipulative bastard, so I was pleased by how much time we got to spend with him in this book. There were some fantastic scenes with him that definitely made me love him more than ever. Shelby is still recovering from a broken heart but I love the friendship between her and Justine. Shelby is always a voice of reason who will tell Justine exactly what she needs to hear and she is always there for her friend which is wonderful to see. Simon has made me laugh throughout the whole series but he outdid himself here, I'm just going to tell you to watch out for the scene when they're shopping for bridesmaid dresses because it was absolutely hilarious!

Overall I thought Head Rush was a great conclusion to the trilogy but I was a little disappointed that a couple of plot threads were left open. A few things were slightly rushed towards the end and I think adding a couple more chapters could have tied it all together perfectly. Either way this is a trilogy I'd be happy to recommend, it's like nothing else I've read and the idea of the Disillusionists is completely unique. I'll definitely be looking out for more from this author in the future and I'd be thrilled if she decided to revisit these characters again in the future.