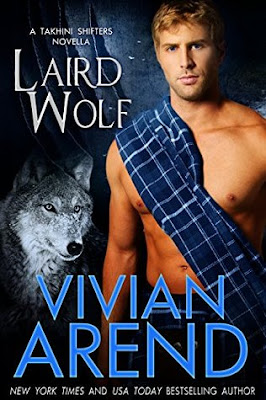 He’s a wolf in a kilt. That pretty much says it all…

Pulling off a rescue mission at a remote castle in Scotland should be an easy task for lone wolf Damon Black. He’ll flash some muscle, show a little Alpha power, and do whatever it takes to ease Addie MacShay’s fears. But the woman who throws herself into his arms and cries boyfriend is more intriguing than anticipated. The sexy she-wolf’s got more curves, more tantalizing scent, more of everything he desires.

Addie’s job cataloguing an estate at the Sterling-Wylde Manor is complicated by the ongoing discovery of new wills and the two creepy heirs who won’t leave her alone. But her fake boyfriend turns out to be a far greater threat—not only is he fun and flirtatious, he looks delicious in a kilt. She craves his touch, but with her empathic skills on overdrive, touch is the last thing she needs.

Damon’s fighting his unruly inner beast. Addie’s fighting their incredible sexual pull. They’ll both have to lower their guard to make this more than a Highland fling.

Takhini Shifters Series:
(This is a spin off off the Granite Lake and Takhini Wolves series but can be read separately)
Copper King (Novella)
Laird Wolf (Novella)

Takhini Wolves Series:
(This is a spin off from the Granite Lake Wolves series but can be read separately)
Black Gold
Silver Mine
Diamond Dust
Moon Shine

Review:
Laird Wolf is the second novella in Vivian Arend's Takhini Shifters series and although these characters have made appearances in the Takhini Wolves books these stories are designed to be completely stand alone so it doesn't matter if you've read the previous books or not. For anyone who is familiar with the series this fits into the time line just after Copper King and before Black Gold.

Cataloguing the contents of a remote Scottish castle for the estate's executor should be easy for Addie but things are complimented by the discovery of multiple wills and the fact that she is being hounded incessantly by two of the potential heirs. Feeling creeped out and unsafe Addie calls her best friend for assistance and Lillie sends lone wolf Damon to protect her. Damon has never wanted a mate or a pack, he's always been happy to live his life on the outside, but Addie brings out all his protective instincts and he's not quite sure what to do with his feelings. One things for sure, he won't let the weird cat shifters who are fighting over the castle harm her, but after that anything goes.

I loved Damon when we met him in Copper King so I was really happy to discover he was getting his own story, he's such a fun guy and it was great to get to know him better. Damon has the strength of an alpha but after a traumatic experience when he was a teenager he has never got along very well with his inner wolf, they never really see eye to eye and he fights against his wolf instincts. Both of them are in full agreement over one thing though - the need to keep Addie safe, they are both intrigued by her and neither of them wants to let her go. Addie is a rare omega wolf and her unusual abilities make it very difficult for her to get close to anyone. She is drawn to Damon but worried about letting him close because skin to skin contact will allow her to see his innermost thoughts.

I really enjoyed the romance between these two, the banter between them was great and they make a cute couple. Addie may have asked for assistance but she's still more than capable of standing up for herself, it's just nice to know she has some back up for when she needs it. I loved how strong she is and that she isn't willing to back down when she's set her mind on something. Damon was sweet and protective and they had great chemistry. Although this is a novella and a fairly quick read I never felt that the romance was rushed, we get to see them become friends and get to know each other and it was easy to believe that they actually had a chance of making their relationship work, even without the whole werewolf mating bond going on.

If you're looking for a fun, sexy story then you can't really go wrong with any of the books in this series. Vivian Arend is one of my go to authors because she never fails to give me an enjoyable story that leaves me with a smile on my face.