Review: Me and Earl and the Dying Girl - Jesse Andrews 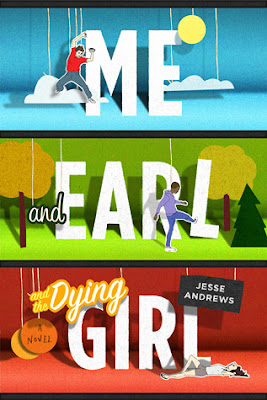 Me: My name is Greg Gaines. I am seventeen. I am the one who wrote this book. My physical appearance is unsatisfactory, and there is probably a fungus eating my brain. I'm not even sure I'm a human.

Earl: Earl Jackson is the only person who is even sort of my friend. We make mediocre films together. Werner Herzog is our biggest influence. Earl is generally filled with violent rage.

Dying Girl: During my senior year, my mother forced me to become friends with a girl who had cancer. This brought about the destruction of my entire life. If you seriously want to read about that, then I guess this brain-punchingly inane book is for you.

Review:
I'm not really too sure what I expected when I picked up Me and Earl and the Dying Girl, obviously from the title you can tell that something terrible is going to happen and I guess I thought it was going to be a fairly emotional story but that wasn't what I got. Instead this was a light hearted and very quick read but while I liked it I didn't love it as much as I had hoped to. The story is full of humour but I'm afraid a lot of it missed the mark for me, I just didn't get it and it almost felt too light hearted considering the sensitive topic it was dealing with.

The characters were okay but I didn't really feel much of a connection to any of them, I guess I just felt like I was being kept at a distance. I think that was partly down to the writing style which consists of very short chapters and quite a lot of scenes written in the form of movie scripts, lists or telephone conversations. The narrator Greg can be quite selfish and insensitive which is something I could have forgiven but I wanted to see him grow up a bit as the story progressed and it didn't really happen. It didn't seem like the events in the book had any lasting effect on him and I would have thought that seeing a friend die would have more of an impact. The antics of Greg and Earl were funny in the beginning but grew old fast and I ended up being disappointed.

To be fair I probably wasn't in the best place when I read this one because we'd just had some very bad news as a family. I think I was hoping for something heart-wrenching like Jenny Downham's Before I Die to help me cry it out and that isn't what this book is even trying to be so I can't blame the story for my expectations. I may have enjoyed it more if I'd picked it up at another time but I have to say I think the book just isn't the best fit for me. I know several people who absolutely loved the story though so would hate to put anyone off giving it a try.

Source: Received from Allen & Unwin in exchange for an honest review