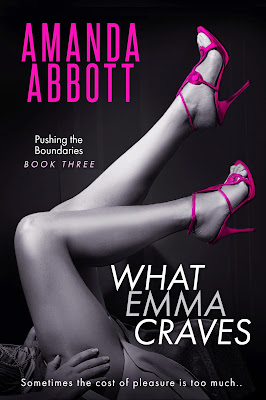 It took a lot for Pete Slater to convince his wife, Emma, to move to the suburbs. But once she arrived, she found it had a deliciously steamy underbelly. Her neighborhood is filled with hook-ups, affairs, and scandal. It's better than any reality TV show.

But Emma finds she isn’t satisfied any more. After seeing Piper and Michael become adventurous again as a couple, it's made Emma realize that's what she wants in her own life. She craves to be noticed again. She decides what the two of them really need is a vacation. The STD girls throw her a travel shower, gifting her some sexy starters, and she and Pete are off to the Bahamas.

Their destination is a super exclusive resort situated on a tiny island where anything and everything can happen. When they meet a young couple at the airport, who end up in the suite next to theirs, things go from fun to incredibly steamy fast. Emma drives Pete crazy flirting, and it pays off. For the first time in their marriage her husband is jealous of another man. What Pete does to win her back turns out to be exactly what Emma craves.

*This book is off the charts hot. It contains: explicit sex, group sex, and voyeurism.

Pushing the Boundaries Series:
What Caroline Wants
What Piper Needs
What Emma Craves
What Gillian Desires (release date to be confirmed)

Review:
I've been a huge fan of this series ever since I picked up the first book so I was really excited to start What Emma Craves. We've already had the chance to learn quite a lot about this couple's extracurricular activities in the previous stories but I was looking forward to getting to know them both a bit better. Emma and Pete have always been more than happy to invite other couples to join them in the bedroom, it's something that they both enjoy and it's never caused an issue in their relationship before. Recently things have been changing for Emma though, she loves her husband like mad but she feels like they're losing the connection that has always made them such a strong couple. She misses the way things used to be and knows that something needs to change. Hoping a break will help them reconnect they have booked a holiday to an exclusive resort on an island where anything goes but will it really give them the chance to rebuild their relationship?

Although this story is undoubtedly hot I have to admit I didn't enjoy it quite as much as the previous instalments. I have always liked Emma but there were times I found myself really frustrated with Pete and the way he was so completely oblivious to her feelings. It felt like she was pushing herself to do things that she wasn't necessarily comfortable with because it was what he wanted and even when he noticed her reticence it didn't seem to bother him. I'm not saying he forces her into anything but you could tell her heart wasn't in it and that took some of the enjoyment out of it for me. I was actually really pleased when Antonio started paying her so much attention and showing her what it was like to actually have someone put her first for a change. This was when the story really started to take off for me and I enjoyed seeing Pete realise that Emma had other options, his jealousy showed that he really did care for her and it shook some sense into him.

There was one side character who got on my nerves from the beginning, Mallory just seemed so self centred and whiny and I couldn't for the life of me understand why Emma ended up becoming friends with her. I especially didn't like the games she was trying to play and it wasn't until right near the end of the book that I believed she was actually trying to help Emma and Pete rather than break them up. I think she was one of the main reasons I didn't like this book as much as I could have.

One thing I definitely enjoyed was the beautiful island setting, it was very easy to picture the decadent resort and it's definitely somewhere I wouldn't mind visiting. I also loved the growing bond between Emma and the other women from the series. There were some great moments between them and I loved the holiday shower they threw along with the gifts they gave Emma. There is a lot of humour in the interactions between them and I'm definitely looking forward to reading Gillian's book because I think it's going to be brilliant.