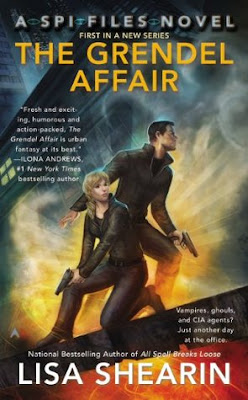 We’re Supernatural Protection & Investigations, known as SPI. Things that go bump in the night, the monsters you thought didn't exist? We battle them and keep you safe. But some supernatural baddies are just too big to contain, even for us…

When I moved to New York to become a world famous journalist, I never imagined that snagging a job at a seedy tabloid would change my career path from trashy reporter to undercover agent. I'm Makenna Fraser, a Seer for SPI. I can see through any disguise, shield, or spell that a paranormal pest can come up with. I track down creatures and my partner, Ian Byrne, takes them out.

Our cases are generally pretty routine, but a sickle-wielding serial killer has been prowling the city’s subway tunnels. And the murderer’s not human. The fiend in question, a descendant of Grendel—yes, that Grendel—shares his ancestor’s hatred of parties, revelry, and drunkards. And with New Year’s Eve in Times Square only two days away, we need to bag him quickly. Because if we don’t find him—and the organization behind him—by midnight, our secret’s out and everyone’s time is up.

Review:
I really enjoyed Lucky Charms, the prequel novella to the SPI Files, when I read it in the Night Shift anthology last year. It was one of those stories that completely took me by surprise and it had me laughing out loud all the way through so of course I was looking forward to continuing the series. I picked up The Grendel Affair expecting a quirky and fun read and to a certain extent that's what I got but unfortunately it didn't quite reach the heights of the novella. In fact, because I reread Lucky Charms just before starting this book it was really noticeable that a lot of the jokes and funny one liners had been used in both stories. Had I not read them so close together I probably wouldn't have spotted it but it did take some of the enjoyment out of reading this book.

The writing feels a little stiff at times and I didn't feel the same level of chemistry between the characters as I did in the prequel novella. The Grendel Affair was actually published before Lucky Charms though so that gives me high hopes that the author's writing style is already evolving and I'm hoping the rest of the series will live up to the prequel. The story gets off to a bit of a slow start which is understandable because the author is introducing us to a new world and a whole cast of characters, I'm always prepared to give the first book in a series a bit of extra leeway because of that. The pace definitely picks up in the second half and once it got going I did find myself really enjoying it.

I like both of the main characters and enjoyed the banter between them but think the chemistry between them was better in the novella than it was in this book. Hopefully that is something that will continue to build throughout the series. There are some fun elements to the story and I'm enjoying the fact that there is such a huge variety of supernatural creatures to discover. Overall I think this series has a lot of potential and if Lisa Shearin manages to raise the bar a little higher then it could turn into another favourite.