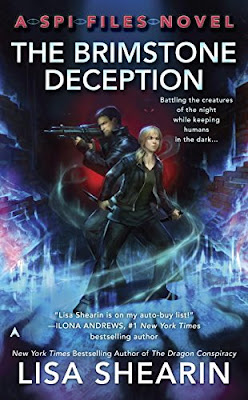 The agents of Supernatural Protection & Investigations (SPI) know that fighting evil is a full-time job, especially when a new designer drug - with mind-blowing side effects - hits the streets . . .

It's called Brimstone. After the first few hits, you'll see every supernatural beast sharing the sidewalk, train, or office with you. After that, you'll start seeing the really scary stuff.

I'm Makenna Fraser, seer for the SPI. And the collateral damage caused by Brimstone is something I'd like to unsee: dead drug dealers missing their hearts - and souls. Because your local pusher doesn't stand a chance against the new cartel muscling its way into New York. Plus, since the drug can only be produced with magic and molten brimstone fresh from Hell, a rift to the underworld must be open somewhere in the city.

It's going to be Hell on Earth.

Review:
There's a new designer drug in town and it has some unfortunate side effects including allowing humans to see through supernatural glamours and realise that there are monsters living among us. As if that wasn't bad enough the drug's main ingredient is brimstone, imported freshly from Hell itself and that means that somewhere hidden in New York is an open portal which could have disastrous consequences if it's not closed before demons start using it as a one way ticket to paradise. SPI Agents Mac and Ian have been tasked with finding out who is behind the drug's creation and also a string of grisly murders amongst the local drug dealers but most importantly they need to find that portal and figure out how to close it before the world is change forever.

This series is going from strength to strength and I really enjoy diving back into this world to spend time with these characters. I love the partnership that is developing between Mac and Ian now that she's starting to find her feet as a Seer. She's still got a lot to learn but it's clear that there is mutual respect between them now and I love the banter between them and their regular driver, werewolf Yasha. I will say that I'm still a bit disappointed that Lisa Shearin seems to have given up on the idea of a romance between Mac and Ian though, they had such brilliant chemistry in the beginning and although I love them as friends I'm still hoping they'll end up being more. I just don't feel the connection between Mac and Rake yet and I'm even less convinced by the Ian and Kylie pairing. Both relationships feel false and they definitely don't have anywhere near the chemistry that Mac and Ian used to. Having said that Rake is growing on me so I'm glad he's still hanging around and perhaps the author will convince me he's a worthy romantic lead eventually.

This series is full of humour so there is lots of witty banter and I enjoy Mac's way of snarking when she's stressed. There is a great cast of side characters too with more being added in every instalment. The Brimstone Deception is full of action and Mac's abilities seem to be heading in an interesting direction, the same goes for the bad guy they're hunting and I'm looking forward to seeing what happens on both counts in future instalments. If you're looking for a lighter funny urban fantasy series you can't go far wrong with this one.

Source: Received from Ace in exchange for an honest review