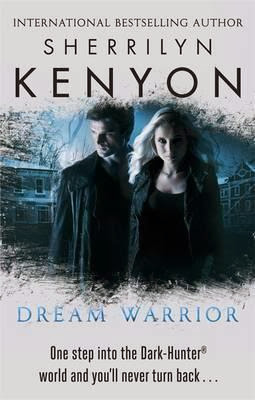 Cratus, the son of Warcraft and Hate, spent eternity battling for the ancient gods who birthed him. He was death to any who crossed him. Until the day he laid down his arms and walked into self-imposed exile. Now an ancient enemy has been unleashed and our dreams are his chosen battlefield. And the only hope we have is the one god who swears he will never fight again.

As a Dream-Hunter, Delphine has spent eternity protecting mankind from the predators who prey on our unconscious state. But now that her allies have been turned, she knows, in order to survive, the Dream-Hunters need another leader. Someone who can train them to fight their new enemies. Cratus is her only hope. But she is a bitter reminder of why he chose to lay down his arms. Time is running out and if she can't win him to her cause, mankind will be slaughtered and the world we know will soon cease to exist.

Review:
After being disappointed by One Silent Night it's taken a while before I felt the urge to pick up another book in the Dark-Hunters series and as much as I've loved some of the earlier books (and Acheron's story in particular!) I have to say I didn't have particularly high expectations for Dream Warrior since it's about characters I don't remember seeing before and therefore didn't feel invested in. I should have known better though because Sherrilyn Kenyon rarely steers me wrong and this book was everything I could have hoped for.

As the son of the gods of Warcraft and Hate Cratus never had an easy life. He spent centuries following Zeus's orders and carrying out punishments on his behalf but when he was asked to kill an innocent child he couldn't bring himself to go through with it. As punishment for refusing to commit murder Cratus was stripped of his godhood and sent into exile on the human realm. For hundreds of years Cratus has lived amongst the humans being tortured nightly by the Dolophoni, he has been kept in isolation and has spent all his time stewing in hatred and wishing for revenge. Now Zeus realises he needs Cratus's help against a mutual enemy who wishes to destroy the world so he sends Dream-Hunter Delphine to try and convince Cratus to put his hatred to one side and ally himself with the gods once more.

I don't want to talk more about the plot so I'll just say that Dream Warrior was a really fun and very easy read. I liked both of the main characters and although they fell in love quite quickly that didn't bother me in the slightest so I found it very easy to cheer them on towards their HEA. There was plenty of humour and action, we're introduced to some new evil characters who will potentially take the series in a new direction and we get cameo appearances from some of our favourite characters from previous books. This was a nice set up for a new story arc and I'm very interested to see where the series goes from here so it definitely won't take me as long to pick up the next book as it did to get to this one.