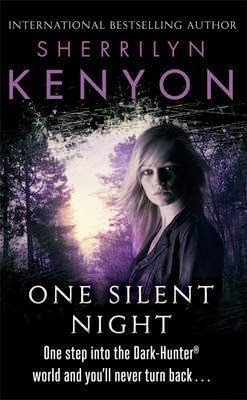 It is the Christmas season and all hell's breaking loose. Literally. While humans are busy shopping, an angry demon lord is plotting an all-out onslaught against his enemies, which - unfortunately for us - includes the human race. But as Stryker gathers his forces, he discovers a grown daughter he never knew existed and an angry ex, Zephyra, who's as determined to end his existence as he is to end ours.

The ultimate predator is about to meet his match as new battle lines are drawn and the Dark-Hunters are rallied for a blood bath on Christmas Eve. The only question is this: can Stryker survive his oldest enemy to fight the ones he really wants to kill - or will Zephyra finally have her shot at the husband who abandoned her?

Review:
Let's face it Acheron is a hard act to follow so any hero that came next was going to have his work cut out. I wasn't convinced that Stryker was the best choice, considering all the horrible things we've seen him do throughout the series he was always going to be hard to sell as a hero for me, but I trust Sherrilyn Kenyon and I do adore a great redemption story so I was willing to give One Silent Night the benefit of the doubt. Unfortunately, no matter how much I wanted to love this story, it just completely failed to win me around.

Stryker in no way managed to redeem himself and he didn't even attempt to make amends for his previous actions. He doesn't seem to think he's done anything wrong and he's STILL plotting against Acheron and the other Dark-Hunters. Zephyra is just as bad and the two of them are determined to destroy all of humanity because of the actions of a few humans centuries ago. I get that the daimons have had a rubbish hand dealt to them but they're not the only people who have had their lives messed up by the gods. They aren't the only ones suffering from curses and we've all just read in great detail about how much crap Acheron has put up with over the centuries but you don't see him plotting mass genocide!

I just don't understand how I'm supposed to feel any sympathy for either of these characters, in fact the best thing I have to say about them is that they deserve each other. At least this way nobody else has to put up with either of them! These two just don't deserve to be happy, I'd rather see them locked up together in a dungeon somewhere to live a miserable eternity of constant fighting until one of them finally murders the other and puts us all out of our misery.

The only thing that makes this book worth reading are the scenes with Acheron or Nick, those two characters steal the show every time they step onto the page and there are some really interesting developments there that I'm glad I found out before continuing the series. That's the only thing stopping me from telling other fans to just skip this story entirely, I would suggest borrowing it from the library rather than paying good money for it though. There is absolutely NOTHING likeable about Stryker or Zephyra, I wasn't at all interested in seeing these two characters get a happy ending and I honestly won't care if they end up dying in later books which is something I never expected to say about any couple in this series. If I had to describe One Silent Night in just one word it would be disappointing and I feel terrible saying that because I normally adore Sherrilyn Kenyon's writing. I guess everyone is allowed a dud at some point though and considering how many books of hers I have absolutely loved I'm not going to let this put me off continuing with the series. I just hope we don't have the misfortune of spending any more time with these two characters in the future!