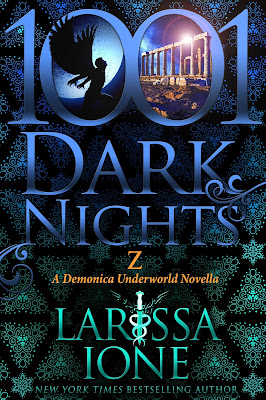 Zhubaal, fallen angel assistant to the Grim Reaper, has spent decades searching for the angel he loved and lost nearly a century ago. Not even her death can keep him from trying to find her, not when he knows she’s been given a second chance at life in a new body. But as time passes, he’s losing hope, and he wonders how much longer he can hold to the oath he swore to her so long ago…

As an emim, the wingless offspring of two fallen angels, Vex has always felt like a second-class citizen. But if she manages to secure a deal with the Grim Reaper — by any means necessary — she will have earned her place in the world. The only obstacle in the way of her plan is a sexy hardass called Z, who seems determined to thwart her at every turn. Soon it becomes clear that they have a powerful connection rooted in the past…but can any vow stand the test of time?

Review:
Zubaal was an elite warrior angel until he gave up his wings to follow the woman he loved when she fell from heaven. Unfortunately Laura died before he could find her again but he knows her soul was reborn and is determined to do whatever it takes to find her. He's dedicated his whole life since he fell to that search, even becoming an assistant to Azagoth, the grim reaper himself, so that he doesn't miss a chance to see Laura's soul if she dies again.

Vex is an emin (the daughter of two fallen angels) and that puts a huge target on her back from both angels and the fallen alike. Few emin are born and even fewer survive but her parents did everything they could to protect her and keep her away from the supernatural world. Until the day she started developing unusual abilities and they were forced to seek help. Vex's ability to capture souls by sucking them inside her was a lucrative one the whole time she was able to trade those souls on the black market but now that someone is working to shut down trade she's in trouble. Without help she has no way to get rid of the souls she has captured and she's at risk of being possessed by the evil soul that is already inside her. Her only chance is to make a deal with Azagoth but the grim reaper isn't a big fan of anyone who attempts to capture his souls.

I've been hoping we'd get Z's story for a long time now since he's been around as a side character in several of the previous stories. We've always known he was searching for someone but I didn't realise quite how much he had given up to be with Laura. He has spent 100 years searching for his long lost love and now finally he thinks he might have found her trapped inside Vex along with the other souls she is trying to sell to Azagoth. Things get complicated very quickly when Azagoth realises that the evil soul Vex has captured is too powerful for him to safely remove it and now the fight is on to save both Vex and Laura before that soul completely takes over and destroys the pair of them.

It's hard to go into too much detail about the romance without giving away spoilers but I loved seeing Z finally find the woman he has loved for so long. His expectations are thwarted when Laura has no memory of him and their past life together though, she is a very different woman now and although he's still attracted to her he keeps thinking if he can just show her how things used to be between them then he can get his version of Laura back. If he's not careful he risks losing her completely by not accepting her for who she is now though. The path to true love never runs smoothly and that's definitely the case for Z and Laura but their struggles are well worth it in the end. Z is another fab story from Larissa Ione and I enjoyed the chance to catch up with Azagoth, Lilliana and several of the other previous characters. I love this world and I'm glad that we've not reached the end of the series yet, in fact Larissa Ione has announced a spin off series that will feature the next generation of characters and I can't wait to get my hands on the first book!

Source: Received from author via Inkslinger PR in exchange for an honest review