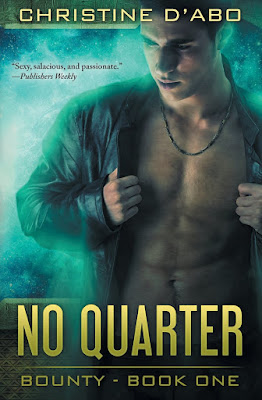 When bounty hunter Gar Stitt is given a simple locate-and-retrieve mission, he’s convinced it’s a waste of his skills. His success rate is legendary, after all, and Captain Faolan Wolf isn’t hard to find. He’s the most notorious pirate in the galaxy, and when he shows up planetside to take his pleasures, he’s far from subtle.

Faolan never expected a hot but tightly wound hunter to walk into his private party and try to apprehend him single-handedly. And when an unexpected betrayal forces them to work together, Faolan’s even more surprised to find himself drawn to Gar personally—especially since neither of them do personal.

Gar had intended to put Faolan in prison. Instead he finds his solitary existence shaken by his desire for the pirate. And when the bounty hunter becomes the hunted, he must put his faith in Faolan and his pirate crew, or run the risk of ending up dead.

The Bounty Series:
No Quarter
No Remedy
No Master

Review:
Gar Stitt is a bounty hunter with a heart of ice, he lost his family when he was young and has sworn never to let anyone close again so he keeps himself to himself and is pretty much a loner. He's the best at what he does though so when the guild send him after space pirate Captain Faolan Wolf he's sure the job will be a walk in the park. Faolan isn't exactly hard to find and Gar knows he'll be an easy capture, what he doesn't realise is that Faolan has orchestrated the whole thing because he wants to make a deal with Gar's boss. What should have been a quick find and kill mission fast turns into a retrieval mission that will have the two men working closely together for days. Add in an unexpected betrayal that finds them on the run and fighting for their lives and all hell is about to break loose.

You can always count on Christine d'Abo when you're looking for a hot read, she creates excellent chemistry between her characters and her stories are always hot as hell so I knew exactly what to expect from No Quarter and I wasn't disappointed. Gar and Faolan are both damaged men with secrets to keep but there is no denying the attraction the feel towards each other no matter how hard they try and fight it. This is a fairly short novel so the romance does happen very quickly but that wasn't an issue because it's so well done. I liked both of the characters and enjoyed seeing Gar start to thaw out a little as Faolan got under his skin. Faolan is the more easygoing of the two and he loves nothing more than winding Gar up and getting him all hot and bothered. No matter how relaxed he is on the outside there's a lot more to Faolan than first meets the eye though and he's a dangerous adversary to get on the wrong side of.