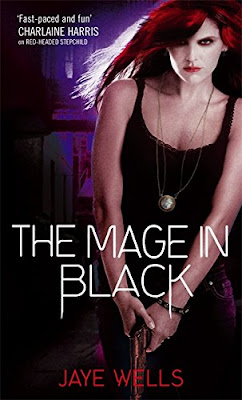 Sabina Kane doesn't have the best track record when it comes to family. After all, her own grandmother, leader of the vampire race, wants her dead. So when she arrives in New York to meet her mage relatives, the reunion puts the fun in dysfunctional. Not only is mage culture completely bizarre, but everyone seems to think she's some kind of 'Chosen' who'll unite the dark races. Sabina doesn't care who chose her, she's not into destiny.

But the mages aren't Sabina's only problem. In New York's Black Light District, she has run-ins with fighting demons, hostile werewolves and an opportunistic old flame. Sabina thought she'd take a bite out of the Big Apple, but it looks like it wants to bite back.

Review:
While I enjoyed the first book in the Sabina Kane series I ended up absolutely devouring The Mage in Black and for me this is where the series really kicked up a gear. Sabina's whole life has been turned upside down by previous events, everything she ever believed in has been torn away from her and she's left without any kind of anchor. The vampires were the only family she ever knew but her grandmother betrayed her terribly and now she has discovered that she has a twin sister who was raised by the mages. Sabina had to leave everything behind and now she's trying to make a new life for herself in New York but it's not easy being constantly surrounded by mages, especially considering she was raised to see them as the enemy.

It was really interesting to see Sabina so totally out of her comfort zone in this book, she is faced with meeting her sister Maisie and although they're twins they couldn't be more different. Thanks to upbringings that were pretty much polar opposites Maisie is the sweetness and light that Sabina was never given the opportunity to become. Sabina is the darker, much more cynical sister and considering her grandmother's actions she has understandable trust issues when it comes to family, especially family she's only just met. It's quite heartbreaking watching Sabina realise how different her life would have been if she'd been the lucky one picked to go and live with the mages at birth but she plays the hand she was dealt pretty well and doesn't let the resentment affect her relationship with Maisie for long.

The side characters who stole my heart in the previous book have just as big roles in this book and Gighul is still my favourite, who knew he could be quite so badass though! He adds a lot of humour to the series and he makes a couple of interesting new friends who I'm looking forward to seeing more of. I did find myself missing Adam though, he's busy with another task for the mage council so he's not around as much as I hoped he would be but I still love the connection between him and Sabina when they are together. They have great chemistry and I have high hopes for them becoming a couple but he has a little competition for her affection in the form of a new character known only as The Shade. If you've read the prequel novella Fool's Gold then The Shade won't be such an unknown quantity and I really do think that novella will give you a better insight into why Sabina's reaction to him was quite so intense. He's definitely going to make life interesting for her that's for sure!

The plot of this book was fairly fast paced and I found this was a very quick read because I didn't want to put it down, I enjoyed getting to know some of the mages and I hope we'll see more of the other races (especially the newly introduced werewolves!) as the series continues. The Dominae have stepped things up a gear now and Sabina is about to head into all out war so I'm sure the series is just going to get even better from here onwards.