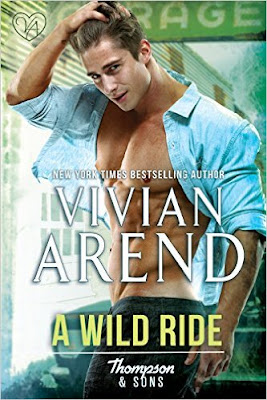 He’s the golden boy with a secret past

When Nicole Adams abruptly cancels their secret fling, Troy Thompson is stunned. The sex between them is sizzling, but she’s ready to move on—find a reliable guy, settle down, pop out a few babies. The thought of Nic in another man’s arms is maddening. And while her agenda freaks him out, Troy knows there’s no one in town nearly good enough for her. No one, that is, except him.

She’s his redemption and his future

Nicole doesn’t regret her sexual romp with Troy, but when he insists on taking the next step with her—marriage and parenthood—she figures he’s out of his mind. Troy? Husband and daddy material? Oh, he’s sexy beyond belief, with the ability to melt her panties with a single command, but the man’s not known for being responsible. Trying for forever with Mr. Frivolous? Everyone thinks it’s a fool’s game.

Everyone except Troy, who’s determined to make Nicole see the real him under the shiny exterior.

Thompson & Sons Series:
Rocky Ride (Novella in the Marked anthology, also available as a separate ebook)
Baby Be Mine
One Sexy Ride
Let it Ride
A Wild Ride

Review:
I've been a fan of this series ever since I read the first book, they're perfect for when I'm in the mood for a humourous, small town romance with a great cast of characters, brilliant chemistry and a lot of laughs on the way to a happily ever after. Vivian Arend is an autoread author for me, she has an extensive back list so I'm still not caught up with all of her books (I'll get there one day!) but she never lets me down whether it's with her contemporaries, paranormal romances or even romantic suspense.

Although this story does work well as a stand alone I think you'll enjoy it even more if you read the series in order because each of the previous couples make ongoing appearances before and after their own book. If you've read the other stories you'll already be familiar with Troy, the youngest of the Thompson brothers. He has always been shown as someone who doesn't take life too seriously, he likes to have fun and he's in no rush to settle down. He isn't particularly a player but he doesn't really go for serious relationships either. What we haven't really seen until now is how much he really adores his family and how many quiet little things he does in the background to make everyone else's lives better. I always liked his character but I fell for him even more when I started to realise how he is the glue that ties the Thompson family together and that everything he does has had a lot of thought put into it.

Nicole has been seeing Troy for a few months, he's her older brother's best friend and roommate so they've kept things secret but they've shared a lot of very passionate encounters when nobody was around to see them. She's known all along that Troy isn't the man she'll settle down with but their friends with benefits relationship was just what she needed at the time. Now though she finds herself thinking about the future, she wants to get serious and find the man who is going to be her partner in life so it's time to end things with Troy and start dating guys who are interested in settling down. It isn't until Nicole tries to walk away that Troy realises how important she has become to him but how can he convince her that he's changed enough to want a serious relationship when she only thinks of him as someone who is happy to sail through life without making any plans for the future?

I have to admit that Nicole took a little while to grow on me, in the beginning she was so determined to date other guys and I was annoyed with the way she refused to listen to Troy and talk things through properly. Thankfully that doesn't last long though and at least her attempts at dating were disastrous enough to be amusing. I loved Troy from the very beginning though, he's just such a great guy and I enjoyed seeing all the little ways he tried to make life better for the people around him. I ended up getting really annoyed with his family for not noticing how much he looked out for them but it was nice to see Nicole wise up and have his back when he really needed her. They make a brilliant couple, the chemistry between them was smoking, and I think this was probably the hottest book of the series but that wasn't all there was to their relationship. They had fun together both in and out of the bedroom and I loved that Troy was able to show Nicole that settling down and planning a future together didn't mean they had to stop enjoying life and messing around sometimes.

This book was pretty much perfect from beginning to end and I'm kind of hoping that Vivian Arend can pull out a few long lost Thompson siblings (or perhaps cousins?) so that the series doesn't have to end here. I guess since this series is loosely linked to her Six Pack Ranch series I now have a perfect excuse to buy more of her books in the meantime though and I'm hoping the characters we met here will at least start to appear in those books if nothing else.