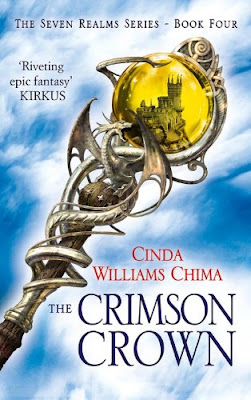 A thousand years ago, two young lovers were betrayed – Alger Waterlow to his death, and Hanalea, Queen of the Fells, to a life without love.

Now, once again, the Queendom of the Fells seems likely to shatter apart. For young queen Raisa ana’Marianna, maintaining peace even within her own castle walls is nearly impossible; tension between wizards and Clan has reached a fevered pitch. With surrounding kingdoms seeking to prey on the Fells’ inner turmoil, Raisa’s best hope is to unite her people against a common enemy. But that enemy might be the person with whom she's falling in love.

Through a complicated web of lies and unholy alliances, former streetlord Han Alister has become a member of the Wizard Council of the Fells. Navigating the cut-throat world of blue blood politics has never been more dangerous, and Han seems to inspire hostility among Clan and wizards alike. His only ally is the queen, and despite the perils involved, Han finds it impossible to ignore his feelings for Raisa. Before long, Han finds himself in possession of a secret believed to be lost to history, a discovery powerful enough to unite the people of the Fells. But will the secret die with him before he can use it?

A simple, devastating truth concealed by a thousand-year-old lie at last comes to light in this stunning conclusion to the Seven Realms series.

Review:
Raisa may have finally been able to claim her birthright and the title of Queen of the Fells but that has given her a whole new set of problems and enemies to fight. All she really wants is to find a way to unite all of her people, the normal valefolk, the wizards AND the clan, but there has been so much enmity between them for such a long time and each party, the wizards and the clan in particular, are clinging to a thousand years worth of anger over betrayals past and present.

Everyone around Raisa has their own agenda and it's nearly impossible for her to decide who to trust, Han always seems to be on her side but even he is keeping a worrying number of secrets. With both the wizards and the Demonai trying to persuade Raisa to marry into their line she has to trust her instincts more than ever before and no matter what she chooses to do she knows she is going to upset at least one party. Raisa hates the idea of marrying for a political alliance but queens don't get the chance to marry for love. Not unless they really fight for it.

I've loved this series since the first book but Cinda Williams Chima really stepped things up a gear in The Crimson Crown and she ends the series on a definite high note. I could go into great detail about all the things I loved about this story but it would be far too easy to give spoilers so I'm just going to tell you that if you enjoyed the earlier books you'll be blown away by this one. I'll warn you that it's quite a stressful read - it certainly raised my blood pressure! - but boy was it worth it. I went through so many emotions during this book, I outright wanted to climb into the book and start murdering the entire Bayar family, I was mad as hell at the Demonai, I cheered for both Raisa and Han, I was shocked by the turn of certain events and I was completely full of joy at the ending.

If I've got any complaints it was that I didn't feel we got a proper ending for one of my favourite characters, he was fairly absent in this book which was a shame considering how important he'd been in the earlier instalments and I really wanted to be reassured that he was going to have a happy future. That's a fairly minor irritation though considering how many threads were tied together and quite how many characters the author did resolve things for so overall I was extremely satisfied with the way things ended. I'm excited that there is going to be a spin off series (set in the same world but 20 years into the future starring the children of characters we've grown to love in these books) but knowing how many of these books have ended on cliffhangers makes me slightly worried that the wait for each book to be published may kill me! Either way Flamecaster is a book I can't wait to start reading and I'm very excited to see where the author takes things from here.