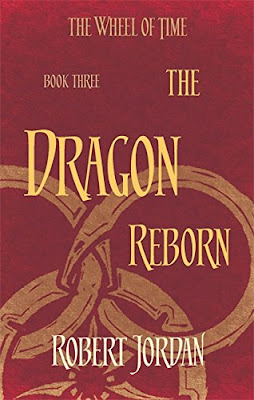 The Shadow lies across the Pattern of the Age, and the Dark One has turned all his power against the prison that binds him. If it fails he will escape and nothing will stand in the storm that blows then . . . save the man that was born to battle the darkness: Rand al'Thor, the Dragon Reborn.

But to wage his war Rand must find Callandor, ancient Sword of the Dragon . . . and the Forsaken will shatter the world to thwart him.

World of Time Series:
New Spring (Prequel Story but it's recommended to read after Crossroads of Twilight)
The Eye of the World
The Great Hunt
The Dragon Reborn
The Shadow Rising
The Fires of Heaven
Lord of Chaos
A Crown of Swords
The Path of Daggers
Winter's Heart
Crossroads of Twilight
Knife of Dreams
The Gathering Storm
Towers of Midnight
A Memory of Light

Review:
This series is just getting better and better and The Dragon Reborn was my favourite instalment so far. There are just so many different plot lines going on and all of the characters have their own paths to follow which is keeping me totally hooked.

We see less of Rand in this book than we did in the first two and a lot of what we learn about him comes second hand via rumours that the others hear. It's obvious that he's still struggling against his destiny and he also seems to be going slightly crazy but I'm hoping he'll be able to turn that around if he can just accept what the wheel has in store for him. Having the story focus less on Rand really gives some of the others more of a chance to shine and I have to admit that Perrin is still my favourite of the three boys. I love how attuned he has become to the wolves but I really hope he stops fighting that ability soon so we can really see what he's capable of. The interactions between him and a certain new character were brilliant and I'm looking forward to seeing where that goes too. Mat has been a difficult character to like in the previous books, thanks to the curse he had picked up he's not been pleasant company for anyone and if I'm honest I didn't think I'd ever end up liking him. I'm pleased to say that he totally turned things around by the end of this book though, now that he's been cured he is getting back to his old self, he's definitely a rogue but he's quite a loveable one. He's constantly trying to convince himself, and everyone around him, that he's no hero but if you look at his actions you'll realise he's just kidding himself on that front and I was pleased with how much he's grown.

Moiraine is still keeping secrets and I find it really frustrating that she keeps everything so close to her chest but I secretly enjoy watching her pulling everyone's strings and making sure that it all plays out the way she wants it to. Nynaeve, Egwene and Elayne have an important task of their own in this book but there were times when Egwene REALLY started to irritate me, the constant bickering between her and Nynaeve made me want to bang their heads together and I could have cheered when Elayne finally did something about it! Let's hope that Egwene has an attitude adjustment in the next book or I'm going to end up dreading any scene with her in it which would be a shame as I've liked all the girls up until this point. I still want to get to know Elayne and Min a bit better than we do, I like what we've seen of them but they're still very much background characters and I'm hoping that's something that will also change as the series continues.

I found this story had a much better pace to it than the previous one, all of the characters seem to be headed in very different directions but the story pulled all the threads together into a brilliant climax and I loved seeing how everything tied together. We have learnt a lot more about the Forsaken and the Black Ajah are pretty terrifying. The sense of danger has definitely ramped up and it's making me feel very nervous about all the things that could potentially happen. I'm so excited to see where the series takes our favourite characters next though and can't wait to dive into the next book!