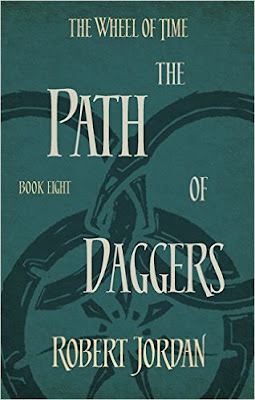 Rand al'Thor, the Dragon Reborn, has conquered the city of Illian, struck down Sammael the Forsaken and shattered the armies of the invading Seanchan. Nynaeve, Aviendha and Elayne have broken the Dark One's hold on the world's weather and are poised to retake the throne of Andor. And Egwene al'Vere, leader of the exiled Aes Sedai, marches her army towards the White Tower.

But Rand and the Asha'man that follow him are slowly being corrupted by the madness that comes to the male wielders of the One Power. If they cannot remove the Dark One's taint from the True Source then none will survive to fight the Last Battle against the Shadow.

And as Rand struggles to maintain his sanity the Seanchan launch their counter-strike.

Review:
I delayed starting The Path of Daggers for 2 months because I was so angry about Tylin's actions in A Crown of Swords. I actually came pretty close to quitting this series for good but I've already read 7 books (close to 6,000 pages!) so I'm not about to let one character ruin it for me, especially when friends told me that character is completely absent from this book. So I finally dove back into this world and I'm really glad I did. I actually think the short break did me good because all the other little things that had started to really irritate me before didn't bother me at half as much in The Path of Daggers. I was just so pleased to be back in this world that I enjoyed every minute of it.

I can see why a lot of people say this is their least favourite book in the series though, the Aes Sedai in particular are up to their old tricks in this book and there are now so many different groups of them that I'm having trouble keeping track of who everyone is. Not only do you have the group in Tar Valon and the "rebels" that are now led by Egwene but each of those groups is split into multiple factions and they're all doing their own thing while trying to achieve different goals. There are emissaries for each group trying to get Rand to do their bidding and I've honestly lost track over who they all represent. All I do know is that I don't trust any Aes Sedai (with the possible exception of Egwene, Nynaeve and Elayne) as far as I could throw them. Considering they are some of the most powerful and well respected characters in the series and as a group they're supposed to be the ones that even Kings and Queens turn to for advice they're a surprisingly stupid bunch. Not one of them will listen to reason and they spend 99% of the time arguing amongst themselves trying decide who should be in charge. Honestly I think someone needs to bash all their heads together and I'm really hoping that now Nynaeve has started to come to her senses she might show us all why she was named village Wisdom at such a young age.

So the Aes Sedai as a whole irritate me but I'm happy that Nynaeve and Egwene finally seem to be able to have a civil conversation without it almost coming to blows. In the last few books they have been really getting on my nerves, particularly Nynaeve because I loved her so much in the beginning, but they're starting to mature a little now and it's about time too. I'm also glad that Nynaeve and Lan are back together at last because hopefully now she's less heartsick she'll actually be able to put her brain to other tasks again. Elayne has her moments but I don't love her as much as the other two, I think I'm just a bit sick of her moping around daydreaming about Rand. To be honest I'm just bored of the weird love square Rand has going on with Elayne, Aviendha and Min, all three of the girls act like idiots every time they think about him and at this point I really don't care who he ends up with or how they resolve things. Aviendha is probably my favourite of the three but she didn't have much of a role in this book and was just hanging around in the background.

I'm glad we got to see more of Perrin and the way his story ended definitely left me desperate for more but Rand was the star of the show in this book. He's got a lot on his plate right now and the reappearance of the Seanchan was the cherry on top of the cake. I really hate that group and can't wait to see them wiped off the face of the planet! I think what I was most disappointed with was the complete absence of Mat in this story, especially after the way things ended for him in the previous book. I guess the bonus of not seeing Mat was that I didn't have to put up with Tylin but I really do want to know what is going on with him.

This wasn't a perfect book but it was a million times better than the last one and it's reignited my love for this series which is something I'm definitely thankful for. I'm now excited to get started on Winter's Heart and looking forward to seeing where Rand's adventure takes us next.