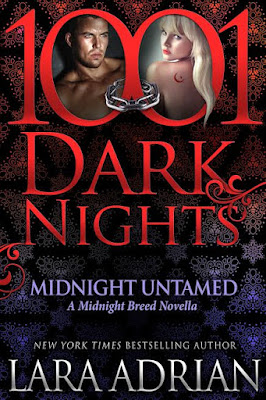 The mission was supposed to be simple. Infiltrate an enemy’s stronghold outside Rome and eliminate its leader. For a Breed warrior as lethal as Ettore Selvaggio, AKA “Savage”, stealth assassinations are only one of his many cold-hearted specialties. But the last thing Savage expects to find behind enemy lines—in his target’s bed—is a woman he once adored.

It’s been years since Savage last saw beautiful Arabella Genova. Years he’s strived to banish to his past, along with the fierce desire he once felt toward Bella . . . and the irresistible calling of her blood that stirs in him even now, despite the fact that she belongs to another male.

But when fate throws Savage and Bella together again in a race for their lives, will his long-lost love prove to be the one woman he can’t live without, or the perfect weapon to destroy him?

Review:
With the help of Vito Massioni Opus Nostrum have been spreading their reach out across Europe and they're now starting to import larger quantities of the dangerous new drug, Red Dragon. Just one hit of the drug turns members of the Breed into blood-addicted Rogues who are completely unable to control their appetites and we've all seen how that usually ends in a very public bloodbath. Lazaro Archer's team has been tasked with eliminating Massioni and the key members of his gang and Ettore "Savage" Selvaggio is on a solo mission to blow up his mansion in the middle of a large gang meeting.

Savage is all set to complete his task when he spots a familiar face inside the building, a blast from the past and the one woman he's never quite been able to get over. He has no idea how Arabella could be involved with Massioni but there's no way he's going to let her get hurt, even if it means going against the order and failing at his mission. Arabella had her heart broken when Savage left her ten years ago, she never understood why he walked away and her life has gone downhill fast since he did thanks to her gambolling addict brother. She's in an impossible situation and hasn't been able to find a way out but perhaps with Savage's help she might be able to fight her way to freedom.

I love the Midnight Breed novellas, obviously the romances move much faster than in the full length books but they're just perfect for when you're in the mood for a fast, fun read that you can finish in one sitting. Lara Adrian always does a brilliant job of making the romances believable even when she's working to a relatively small page count and Midnight Untamed is no exception. I love second chance romances and getting to know about Savage and Arabella's background helps to make the speed they reconnect at much more believable. They have unfinished business and it's very quickly obvious that the attraction the felt 10 years ago has only grown stronger while they were apart.

I liked that the story continued the Opus Nostrum story line from the main books in the series, it meant we got a nice amount of action without needing too much new background information. I'm also enjoying getting to see more of the Rome based members of the order and hope we're going to get a story about Trygg soon. What I REALLY want is more about Scythe though, his character is introduced here and I can't wait to learn more about what happened to him in the past and meet the rest of his brothers!

Source: I received an ebook from the author in exchange for an honest review but I also purchased a print copy for my favourites shelf!