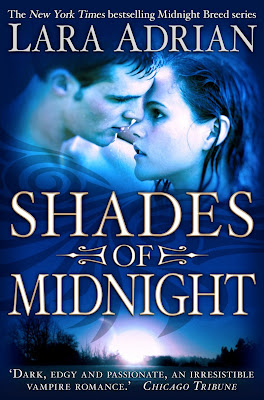 Her sanctuary has become her darkest nightmare...

Something inhuman has let itself loose in the Alaskan tundra, leaving a wake of unspeakable carnage.  For bush pilot Alex Maguire the wreckage is especially chilling - Alaska was her refuge, the place to which she fled after the brutal murder of her family.

Review:
This is book 7 in the Midnight Breed series & although each book can be read as a stand alone story I really recommend that you read the books in order in order to get the most out of the series and follow the ongoing story.  You can read my reviews for the other books by clicking on the links above in the series list.

Alex is a pilot in Alaska who earns a living delivering supplies to remove villages.  When doing one of her usual deliveries she discovers the bodies of an entire family who have been brutally murdered.  The terrifying thing for Alex is that she has seen this kind of damage before - when her Mother & Brother were killed years ago.  She had escaped the tragedy with her Father & they fled to Alaska hoping they would be safe there.  Alex has never told anyone the truth about her past and doesn't know who to turn to now that it seems to be happening again.

The Order becomes aware of the killings when video footage of the bodies turns up on the internet.  Suspecting that the family was killed by Rogues Lucan decides to send Kade back to his homeland to control the situation and make sure the Rogues are dealt with.  Kade left Alaska a year ago to join the Order in Boston and hasn't been home since, avoiding issues he has with his twin brother Seth.  Although Kade has made appearances in previous books we don't know much about him or his history and I really enjoyed finding out more about him.  His talent is telepathy with animals and he is able to to see through their eyes and control their actions which I found really interesting.

The attraction between Kade and Alex is instant although he has no idea that she is a Breedmate and she struggles to understand why she finds herself so drawn to him.  I enjoyed seeing their relationship develop and really loved Kade.  There are so many things going on in this book & I couldn't put it down.  The ongoing war between the Order and the Rogues is developing really well & I can't wait to see what happens next.

I've been a fan of this series since the first book but I honestly think it is just getting better & better with each new release.  I love the world that Lara Adrian has created - it drew me in from the beginning and has kept me hooked ever since.  The action is fast paced and building up to what I can only assume will be a spectacular finish, although I'm pleased to say we have several more books to come!  I've already re-read most of the books in the series & I know I'll be happy to read this one again in the future.  If you haven't already discovered the series then I'd highly recommend it.

Other Reviews:
Pearl's World of Romance
If you have reviewed this book on your blog please leave a link to your review in the comments & I'll add the link here.