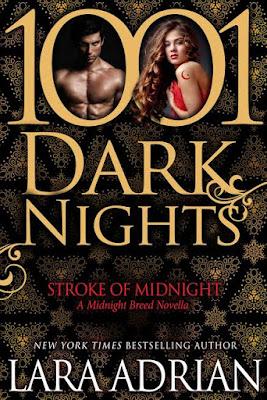 Born to a noble Breed lineage steeped in exotic ritual and familial duty, vampire warrior Jehan walked away from the luxurious trappings of his upbringing in Morocco to join the Order’s command center in Rome.

But when a generations-old obligation calls Jehan home, the reluctant desert prince finds himself thrust into an unwanted handfasting with Seraphina, an unwilling beauty who’s as determined as he is to resist the antiquated pact between their families.

Yet as intent as they are to prove their incompatibility, neither can deny the attraction that ignites between them. And as Jehan and Seraphina fight to resist the calling of their blood, a deadly enemy seeks to end their uneasy truce before it even begins . . .

Review:
I've been hoping we'd get to see more of Jehan ever since we met him in the previous 1001 Dark Nights novella Lara Adrian wrote (Tempted by Midnight) so I was incredibly excited when I saw the blurb for Stroke of Midnight! I'm actually hoping she might continue the trend because there are a few other members of the Rome branch of the Order that I'd like to get to know better so I'll be keeping my fingers crossed for a few more novellas in the not too distant future!

Stroke of Midnight is a bit different to the other stories in the Midnight Breed series, I don't think we've ever had an arranged mating before so I was interested to see how that would change the dynamic between the main couple. Centuries ago Jehan and Seraphina's families were at war but that all changed when a member of each side fell in love. Since that day it has become a tradition that each generation tries to find a love match to strengthen that bond between the two families.

When Jehan's father tells him it's his turn to shoulder the burden he is horrified, he loves his life fighting with the Order and the last thing he needs is a mate. Luckily he only has to show willing and agree to a hand fasting ceremony with Breedmate Seraphina. They will then be sequestered together for eight days and nights in the hope that they'll fall in love and choose to take a blood bond but as long as he keeps his distance he'll be able to return to his normal life at the end of it and the task of uniting the families will fall to someone else's shoulders. Seraphina has no intention of accepting Jehan as a mate either, she loves her job helping refugees and has no interest in giving it all up to mate with a member of the Order. What neither of them counted on was the scorching hot attraction that burns between them the moment they set eyes on each other. Surely it shouldn't be too hard to resist acting on it though? After all they only have to spend eight days alone together . . .

I absolutely loved this novella, Jehan and Sera were both fantastic characters and even though their relationship developed quickly I was totally on board with everything that happened between them. Their connection never felt forced and I thought they were really sweet together. One of the things I love so much about the Midnight Breed series is that we have characters spread out across the globe so although most of the series is set in America we do get to visit other locations as well. Jehan is based in Rome but this particular story is set in Morocco and I loved the descriptions of the desert we are treated to. I was also surprised by how much action Lara Adrian managed to fit into this novella, I wasn't expecting so much to be going on considering the couple were supposed to be alone for eight days. I'm not going to tell you what actually happens so you'll have to read the story for yourself but there was a perfect blend between the romance and action and I liked how things tied back into the main series story arc.

My only complaint is that I'm now caught up with the series again so I'm going to have to wait for something new to be published. I think it might be time for a series reread though, it's been a while since I spent much time with the original warriors so I should probably do something about that!