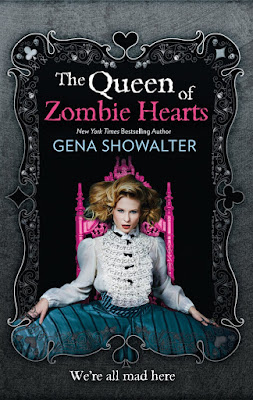 Alice Bell thinks the worst is behind her. She's fought zombies and won. Now she's ready for a peaceful life with boyfriend Cole, the leader of the zombie slayers . . . until the dangerous agency controlling the undead launches an attack with devastating consequences.

Humans can be more dangerous than monsters . . . and the worst has only just begun.

They've started a war. Alice is determined to end it.

The White Rabbit Chronicles:
Alice in Zombieland
Alice Through the Zombie Glass
The Queen of Zombie Hearts
A Mad Zombie Party

Review:
If you thought the stakes were high in Alice Through the Zombie Glass that's nothing compared to what Ali and the slayers are facing in this instalment. Zombies may be evil but they're mindless creatures that act on instinct and it turns out that humans are far more dangerous. Anima doesn't want to see the slayers wipe out the zombies, not when they've worked so hard to find a way to control them, so they will do whatever it takes to wipe out Ali and her friends.

Right from the beginning of The Queen of Zombie Hearts the action is off the charts and the slayers are really up against it. Anima is always one step ahead and they're willing to act with lethal force to get rid of everyone Ali cares about. I was on the edge of my seat for much of the story, there are some great twists and a couple of shocks that I would never have spotted coming. I actually came pretty close to tears at one point thanks to one unexpected and utterly heart wrenching event. In fact, I'm still not quite sure I believe that I read that part right, I kept hoping it would all turn out to be some kind of horrific misunderstanding.

I was pleased to see that Ali and Cole had got their relationship back on track but then there is one moment where Cole reverted to his foolish behaviour and pushed Ali away again. It was in a particularly emotional situation so part of me could understand his reaction but I was annoyed that once again he turned his back on her when she needed him the most. I think I find it more frustrating because most of the time he's such a great guy and I'm generally really happy to root for them as a couple. I just wish he wouldn't have these stupid moments.

There are a lot of changes in this book, a lot of revelations about characters we know and love and we get to meet a whole new group of slayers who added an interesting dynamic to the story. The two groups don't really trust each other but Anima is causing so much trouble that they have to work together if they're going to have any chance of stopping them. The story has definitely ramped up on all levels and I can't wait to see how things play out in the next book. Ali has been through a lot already but I think she's still got quite a battle ahead of her before she can let her guard down.