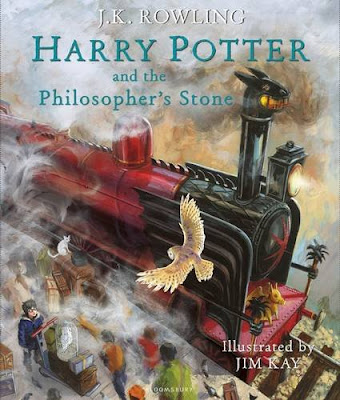 Prepare to be spellbound by Jim Kay's dazzling depiction of the wizarding world and much loved characters in this full-colour illustrated hardback edition of the nation's favourite children's book - Harry Potter and the Philosopher's Stone. Brimming with rich detail and humour that perfectly complements J.K. Rowling's timeless classic, Jim Kay's glorious illustrations will captivate fans and new readers alike.

When a letter arrives for unhappy but ordinary Harry Potter, a decade-old secret is revealed to him that apparently he's the last to know. His parents were wizards, killed by a Dark Lord's curse when Harry was just a baby, and which he somehow survived. Leaving his unsympathetic aunt and uncle for Hogwarts School of Witchcraft and Wizardry, Harry stumbles upon a sinister mystery when he finds a three-headed dog guarding a room on the third floor. Then he hears of a missing stone with astonishing powers, which could be valuable, dangerous - or both. An incredible adventure is about to begin!

Review:
As soon as I saw images of Harry Potter and the Philosopher's Stone: Illustrated Edition I knew I had to have it, as a huge fan of the series and someone who already owns several print versions as well as the ebook of each Harry Potter story there was no way I could miss out on this beautiful new edition. There is absolutely no point in me writing another review of the story (you can read my original one HERE) because I'm pretty sure that most of the people who are going to be looking at buying this book are already going to be Harry Potter fans so instead I'm going to focus on the quality of the book and the illustrations.

To put it simply this book is STUNNING. I had high expectations but was totally blown away by how beautiful this book is, it brings back the magical feeling of reading Harry Potter for the first time and I think it's definitely a perfect edition to read with children. Jim Kay has done a fantastic job of giving new life to the characters, he's managed to make them his own (which must have been quite hard to do considering how well everyone knows the actors from the movies) while still making them instantly recognisable.

The book itself is a lot larger than I expected and has me wondering if they'll have to publish the later books in more than one edition. The quality is brilliant with lovely glossy pages and gorgeous illustrated end pages. This is the kind of book that you want to treasure and it would make a perfect gift for any Harry Potter fan. I can't wait to see the illustrated editions of the rest of the series and will definitely be purchasing them as soon as they're published.

I'm going to finish this review with a few pictures I took of the book so you can see just how beautiful some of the illustrations are: