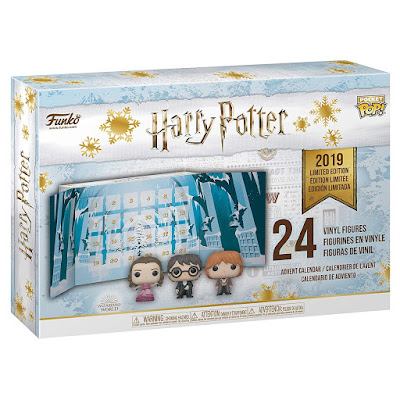 Bring a touch of magic to your holidays with your favorite witches, wizards and magical creatures straight out of J.K. Rowling’s imagination. This 24-piece advent calendar contains a different Pocket Pop! character surprise for every day of December. Whether you take your new wizard and witch companions for a mug of hot butterbeer or sledding past the Whomping Willow is entirely up to you.

Review:
As a total Potterhead I couldn't resist this Funko Pop Advent Calendar and I really enjoyed opening a door each day and seeing which character was revealed. Overall I was impressed with the design of most of the characters and I loved that we got some that I've not seen as larger pops before. I think at full recommended retail price it's a little on the high side but luckily I was able to pick it up for half price at the end of November so I think I got quite a bargain.

I've seen several reviewers mention duplicates or missing pops but I was one of the lucky ones who didn't have that issue. Now we're well past December I feel happy to post pictures of each of the pops received but if you don't want spoilers then you should probably avoid reading anymore of this review! 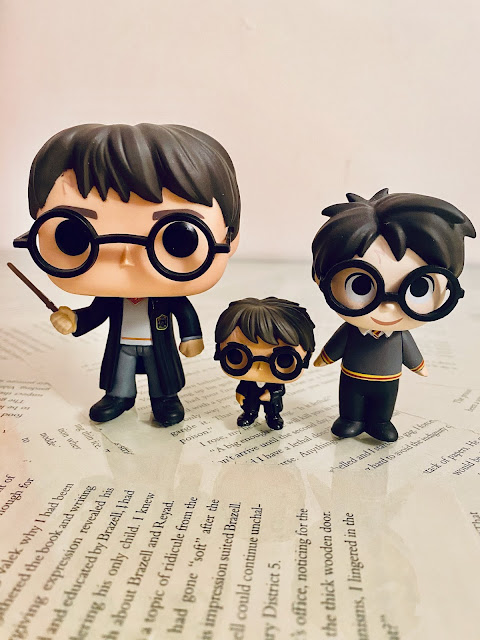 If you want to know how big the pops are I took this pic of the full sized Harry Funko, next to the calendar one and a Funko Mini. It's a little smaller than I was expecting but they've still managed to include all the details you'd expect. I think they're probably closest in size to the Funko keyrings that you can buy but I don't have one of those on hand to show a comparison.

So lets talk about the pops included: 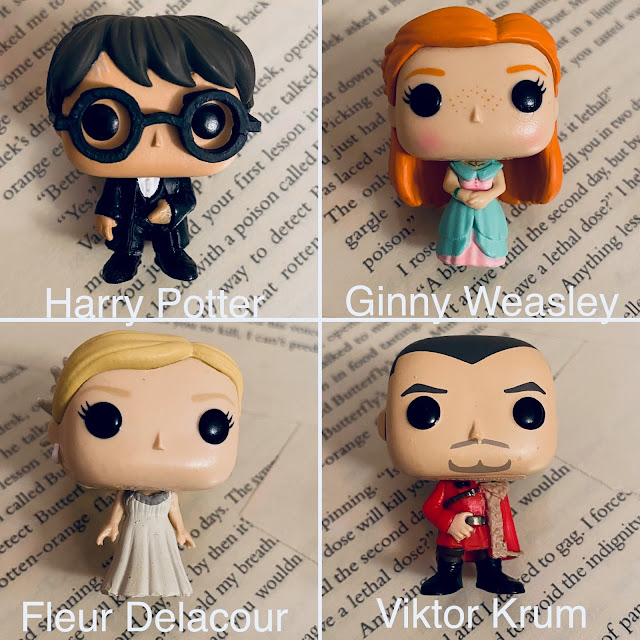 I was surprised that the calendar didn't start with Harry, Hermione and Ron but I think all four of these pops are cute. The only one I didn't immediately recognise is Fleur but all of the others are obvious at first glance. Harry has a weird shaped hand but Ginny's freckles are adorable, I think Fleur's her dress is a little on the plain side but she has pretty flowers in her hair that make up for it and I think they did a good job with Viktor's uniform. 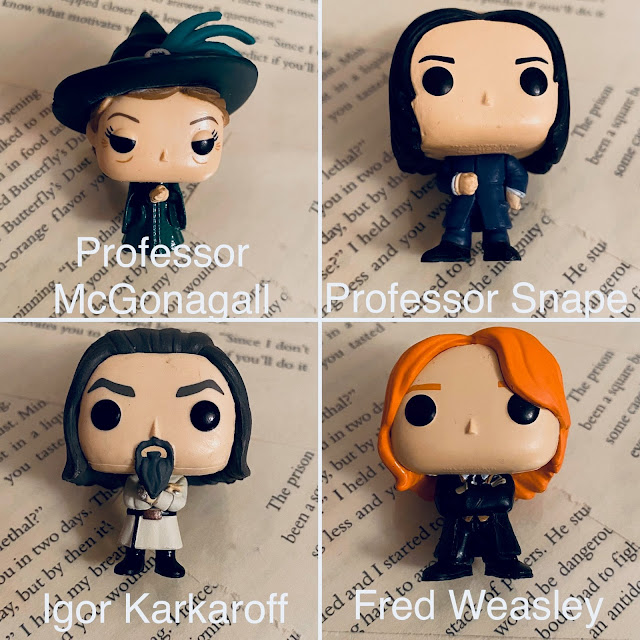 I was happy to see Professors McGonagall and Snape but I wasn't that fussed about getting Igor Karkaroff, it's not a bad pop, just not one I was excited to open. I love the Fred & George (see next picture) pops, at first I thought they were completely identical (I mean they are identical twins!) but noticing the slightly different hair styles made me like them even more. 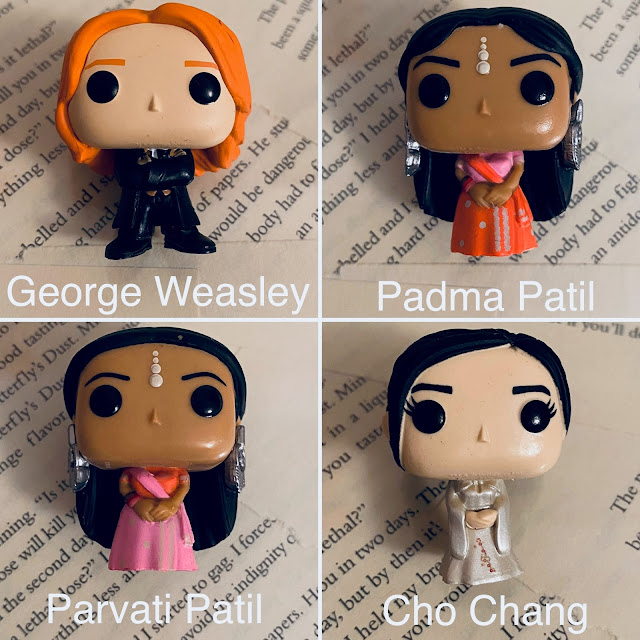 I've not seen pops for Padma, Parvati or Cho before so I thought they were nice additions to the collection. 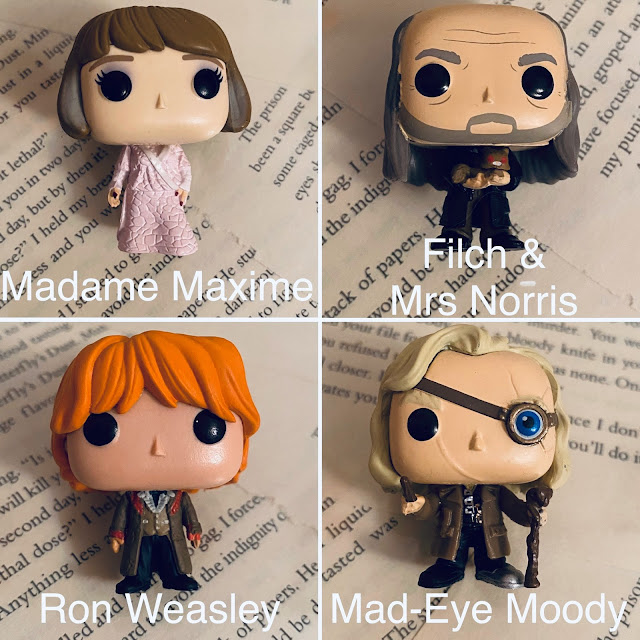 The attention to detail really shows with Madame Maxime who is taller than all of the other pops in the calendar and I really love that Filch is holding a teeny Mrs Norris! We have Ron in his ugly hand-me-down robes and a brilliant version of Mad-Eye Moody too. 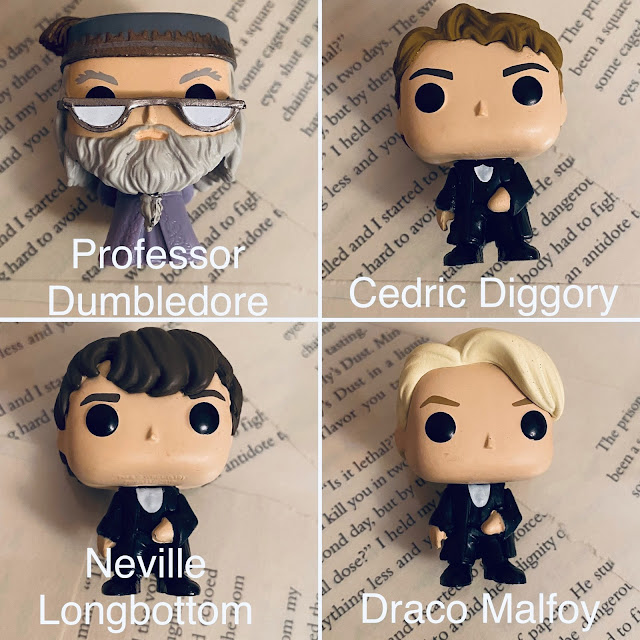 Dumbledore looks very snazzy in his purple dress robes and I really like the faces of Cedric, Neville & Draco who were again easy to recognise. I was disappointed that the last 3 had identical bodies though, all with a stupid fat hand that has no fingers (if you look at the other pics you'll see this is the same body used for the first Harry pop too!). 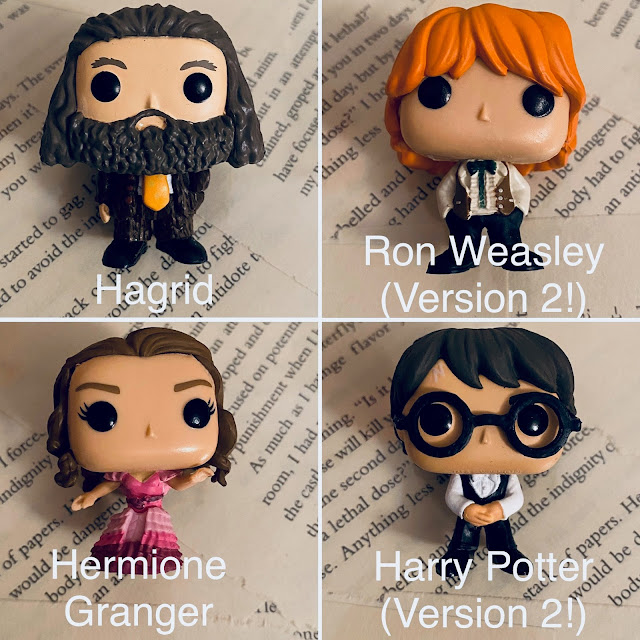 I was so happy to find Hagrid but I was getting annoyed that I was on day 21 with no sign of Hermione, especially when I opened day 22 and found a second Ron! It's not a duplicate, if you look at them together he's removed his jacket in the second version but why do we need two of him? FINALLY Hermione is behind door 23 and I couldn't be happier because she is so pretty in her Yule Ball dress. The final door was a second version of Harry, again without his jacket. Why? Why would they do that? 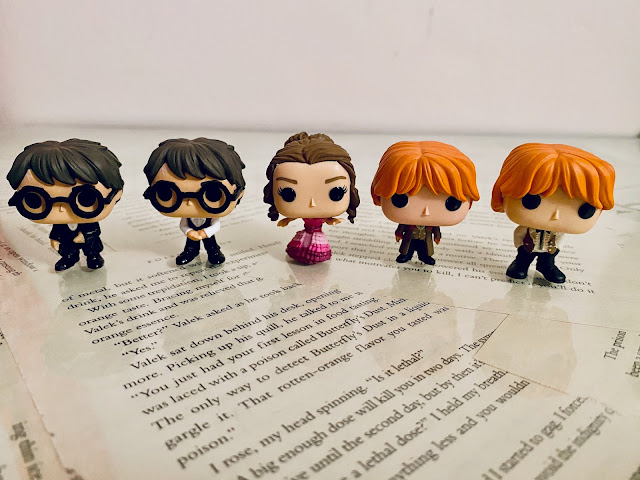 So we get 2 versions of both Harry and Ron but only one Hermione?! To be honest I'm disappointed there were any duplicated characters at all and I really don't think there was any need for it. I can think of so many other characters that they could have used for those 2 extra pops. What about Luna and Dobby? Those would be my top pics but if not them there's still lots of teachers to choose from, Professors Flitwick or Sprout, Madam Hooch, they could have even gone a different route and added Voldemort. ANY of those options would have been better than duplicates in my mind and that's what knocked a star off of my rating. 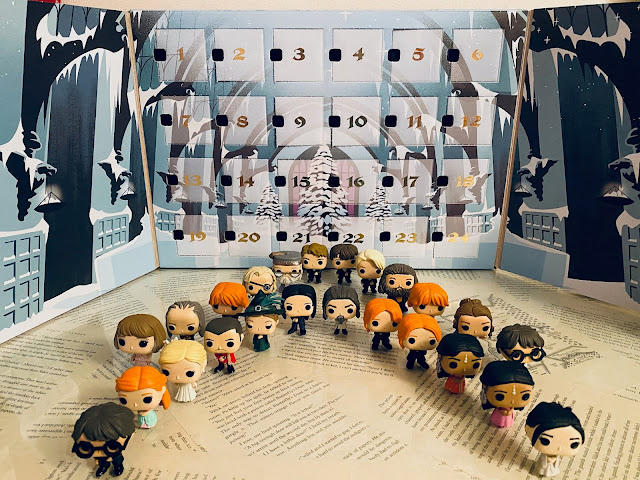