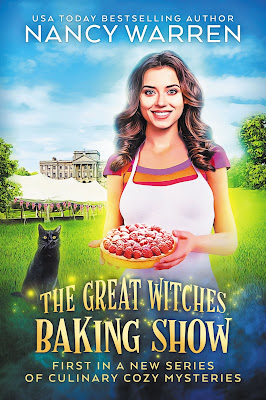 Review:
Poppy is thrilled when she is chosen as a contestant for The Great British Baking Contest for two reasons, not only does she love to bake but she's also hoping that returning to the area she was born in will give her the chance to try and trace the family that gave her away when she was just a baby. Taking part in the show is both nerve wracking and great fun but it goes downhill fast when one of the other contestants is murdered. Now Poppy finds herself with more than one mystery on her hands and she's determined to solve them both.

I've heard great things about Nancy Warren's Vampire Knitting Club series but as soon as I heard about The Great Witches Baking Show I knew I had to start here. The Great British Bake Off is a show that most Brits are obsessed with, it's one of those comforts that always makes you smile no matter how bad the world is and this story is the same but in book form. As the first book in the series we're only just starting to get to know the characters but I really liked Poppy and the other contestants mostly seem like a supportive group. The judges were fun and I'm particularly curious about Poppy's search for her birth family.

As a cozy mystery this book is light hearted and humorous in spite of the murder and I found it a very fast and fun read. I think there is a lot more to uncover about Poppy and her newly discovered abilities and I'm glad that the next two books are being released so quickly (Baker's Coven in March & A Rolling Scone in May) so I won't have to wait too long to find out what happens next.