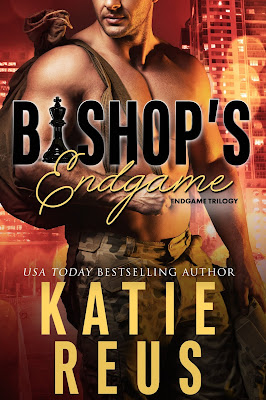 Read the final book in the Endgame trilogy where blood is thick, but passion is thicker...

He kidnapped a princess to exact revenge.

Set up for a crime he didn’t commit, Ellis Bishop takes the law into his own hands to exact justice and clear his name. Unfortunately, that means he has to kidnap a crime boss’s daughter—a perfect mafia princess, set to become queen of a dirty empire. What he didn’t count on was falling for his mortal enemy’s daughter.

He wasn’t supposed to fall for her.

Arianna hates the man who kidnapped her, but soon she realizes that things aren’t what they seem. Ellis was framed by her stepfather and is trying to clear his name. If she helps him, it means betraying her family. But how can she turn her back on him when he’s innocent… when her stepfather turns out to be a monster she never really knew at all?

Review:
Ellis spent years working undercover for the DEA but when his partner and best friend is killed by a mob boss Ellis finds himself set up for the murder and has to go into hiding. He's been trying to clear his name for months but knowing at least one dirty DEA agent helped set him up he has very few people he can turn to for help. All of his leads bring him to Ariana, the step-daughter of the mob boss who murdered his friend and with bank accounts in her name full of drug money she's in this mess up to her eyeballs and Ellis is more than happy to use her to make her father pay.

What Ellis doesn't realise is that Arianna is just as much a victim as he is, her stepfather has been setting her up too and she has absolutely no knowledge of any of his dodgy business dealings. Now their only choice is to work together to find out exactly what her stepfather has planned and find a way to prove both of their innocence.

I've enjoyed every minute of the Endgame trilogy, the first two books were great but I think Bishop's Endgame was my favourite of them all. We've known about Ellis since the first book, he's only made a very brief appearance up to this point but his brother and sister have both been trying to figure out how to help him clear his name so I already felt like I knew him. I'm going to admit things didn't start out great between him and Arianna, it's not often I find myself rooting for a kidnapper hero that's for sure. But Ellis had good reason to believe that Arianna was just as dirty as her stepfather so it was hard to blame him for his actions. Especially when he was so quick to apologise and try to make amends when he realised what a huge mistake he'd made.

Ellis was actually a really great guy, he'd been pushed to terrible lengths trying to get his life back but he was devastated by the loss of his best friend and the betrayal of another agent that he should have been able to trust. Yes he makes mistakes in the beginning but even when he believes Arianna is part of the mob he never physically hurts her or crosses any unforgivable lines. Arianna has absolutely no idea that her stepfather is a criminal so she's horrified when she realises the kind of man he is. She could have chosen to just go back to her safe and normal life but her family is responsible for the position Ellis is in and she wants to do what she can to help him get his life back.

I thought the two of them worked really well together and I liked that they didn't immediately jump into bed together. Things to happen over a fairly short timeline but they still got to know each other before falling into a relationship. It was great to see characters from the previous books pop up too and I thought this was a fitting end to the trilogy.