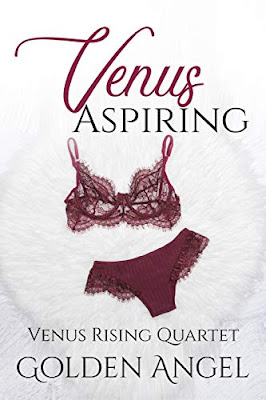 After graduating from The Venus School and returning to reality, Jessica learns that both Justin and Chris deceived her while she was studying her every fantasy with them. Though the betrayal does nothing to quell her equal desires for each man, now she can’t be sure if either man she fell for was even real.

And even though both men are willing to fight for Jessica in an effort to earn her trust once more, she’s not ready to choose one over the other, and she’s certainly not prepared to navigate a relationship with both of them. After all, what would people think?

Editor’s note: Venus Aspiring is a high-heat romantic adventure that contains elements of MF, MFM, and other extremely mature themes. It is book two in the Venus Rising series and is intended to be read and enjoyed after Venus School. Proceed with caution (or excitement)!

Review:
This second book in the Venus Rising series deals with the fallout of Jessica coming home from the Venus School and realising that two of her teachers, ones who she had started to have feelings for, are actually colleagues who work at her company and who knew exactly who she was the whole time. Not only does Jess feel betrayed that they never told her their true identities but she's also embarrassed and worried that they're going to tell everyone she works with exactly what she got up to on her holiday. Luckily for Jess that is the last thing Justin and Chris want. They may have gone about it badly but both of them had been trying to pursue her for months and now they know she is into the same kinks as them they're both hoping that she'll be willing to let them woo her now they're home.

Jess may have been annoyed by the way Justin and Chris handled things but these two are REALLY good at grovelling and it doesn't take them long to get back in her good graces. Both of them want the chance at a relationship with her but Jess is having real problems making a choice because she's got strong feelings for both of them. The more time they all spend together the more they start to realise that perhaps she doesn't need to make a choice but a triad relationship is hardly conventional and they're walking a difficult line when it comes to deciding what to tell other people.

It was great seeing Jess, Justin and Chris become more secure in their relationship but Jess still isn't sure she's ready to deal with the fallout of making things public. Luckily their friends have been fairly supportive but breaking the news to their families doesn't go down well so they've still got plenty of hurdles to overcome. I have to say I really love how open and accepting Jess' best friend Hilary is and I have very high hopes for the potential romance between her and Liam. I also really enjoyed meeting the Doms (& Domme) from Stronghold so I'm pretty sure I'll be diving into that series as soon as I finish this one!