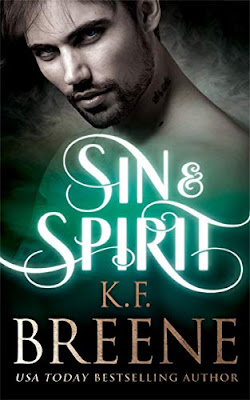 Kieran has stepped up to take his place as the ruler of magical San Francisco. As his girlfriend I'm in the spotlight, and the Hades Demigods have taken notice. They want me on their team, and they don’t plan on asking nicely.

Kieran and I are both under fire. They will kill him to get to me, and they'll take me by force if necessary. It is essential I learn more of my magic.

With no other options, I do what scares me the most - I summon the last Spirit Walker to help train me. Except, he's a loose cannon with looser morals, and learning spirit is treacherous. I might evade the Demigods only to be lost in spirit forever.

Review:
In the fourth book in K.F. Breene's Demigods of San Francisco series we see Lexi and Kieran facing their most dangerous enemies yet. Killing Valens was only the start of their problems and now that Kieran has taken his place as the ruler of San Francisco he's fully caught the attention of the other Demigods around the world. Not only are they watching to see what kind of ruler Kieran will be but they've also heard rumours about Lexi's Spirit Walker abilities. If any of them is able to capture Lexi and train her they'll have a formidable weapon in their hands, but Lexi and Kieran have other ideas and if she can find someone else to be her guide then they'll be a power couple the other Demigods will have to watch out for.

If you thought the battle in the previous book was intense you haven't seen anything yet. Before they were facing off against one Demigod and it nearly cost them everything, now they have multiple enemies who are all plotting against them and they have no idea where the next attack will come from or which of the other Demigods might be working together against them. This is only the start of their battle to prove themselves and it could all end in disaster at the first hurdle.

I've loved this series since the beginning but each book has only got better along the way. Lexi and Kieran make a great couple but I think one of the things I love the most is the family they've built together with Lexi's wards Daisy and Mordecai as well as the members of Kieran's Six, the men who have been at his side for years and who are more like brothers than bodyguards. Daisy is the only human in the bunch but she has been continuing her training and is able to hold her own against the others by using her brain as well as her physical strength and that is something she's going to need to hold on to more than ever in this book. The danger is off the charts and there were some heart stopping moments but we also get to see Lexi learn even more about her abilities and watch the group really come together to fight against their enemies. The battle is only just beginning and I can't wait to see where the series takes us next.