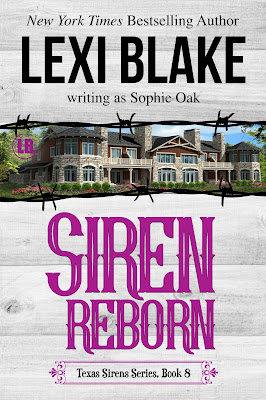 Cole Roberts and Mason Scott loved each other since childhood, but they needed something more to make them whole. They searched for a woman who could complete them, but a terrible accident tore them apart. Their perfect life shattered, they were each left angry and alone.

Kitten Taylor’s past is filled with heartache. She yearns to be part of a family she can call her own. When Cole takes her in, she hopes to finally find the place she belongs, but quickly realizes something is wrong. There is a chasm between them and every day it seems to get worse. When they are alone together, she can sense the wonderful bond they could share, but they can’t seem to find a way to connect.

Everything changes when Kitten meets Mason for the first time. She instantly feels a connection and realizes how perfect their lives could be if Mason and Cole could look beyond the past.

When a killer puts the trio in their crosshairs, Cole and Mason will have to put aside the betrayal and hurt they allowed to consume them in order to forge a future with the woman they love.

Review:
Kitten has been a side character in both the Texas Sirens and Nights in Bliss series for quite a while now so I've been looking forward to her story for what feels like forever. We already knew that she'd been abducted from college as an innocent and pretty naive teenager and treated appallingly by the man who held her prisoner, we've seen her trying to deal with the consequences of that with the help of Julian, Leo and other members of the club for a couple of years now and slowly starting to regain her confidence.

All Kitten has ever really wanted is a family to call her own but it's only after years of therapy that Julian and the others believe she is finally ready for a proper relationship. She recently signed a six month D/s contract with Cole and although she is starting to develop feelings for him there is still something missing from their relationship because he's afraid to take the next step with her in case it brings back memories of the trauma she experienced. Kitten is longing for something more but she's having trouble asking for it while Cole is trapped in a vicious cycle of wanting to protect Kitten but ending up smothering her by mistake. It isn't until Mason walks into their lives that things start to change. Cole and Mason have an incredibly complicated history but Mason is able to understand exactly what both Cole and Kitten need and he helps them learn to communicate.

This was probably the most emotional story in either of these series, Kitten has been through so much but she's still such a joyous character. She's seen the worst life has to offer and now she's determined to always find the positives no matter what situation she's in, she looks for the beauty in life and her personality is infectious to the people around her. Mason is also fantastic, his history with Cole was really difficult and I felt so sorry for the way he had been treated so it was very easy to root for him as a character. Cole had made some really stupid decisions in the past, mainly down to his own guilt I think, which is the reason I was able to forgive his actions reasonably quickly. I'm glad he was able to prove to Mason that he'd changed and show both Mason and Kitten what a wonderful life they could have together.

These series have an incredibly high heat level but the sex always compliments the romance and never talks away from it. The relationships are so well developed that I never have a problem believing that the triads can make it work long term once they work through whatever issues are facing them becoming a thruple in the first place. My only minor complaint is that it was really easy to figure out who was messing with Cole's business but since I'm far more interested in the romance and relationship that is really not worth worrying about. I'm sad that we seem to have come to the end of both of these series now, well all of the original stories have now been rereleased anyway, but I really hope Lexi Blake decides to write more books around these characters and set in Bliss. I know some of them pop up in the Masters & Mercenaries books from time to time but I'm not ready to say goodbye completely.