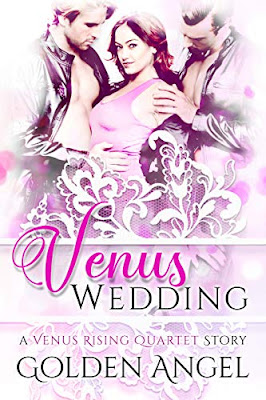 You are cordially invited to the wedding of the season...

But what awaits them on their special day is no fairy tale. Not everyone in their lives has accepted their uncommon bond. And one of the guests isn't attending the wedding... he's trying to stop it.

Review:
The wedding of the year has arrived and we've been given front row seats with this final book in the Venus Rising series. Jessica, Justin and Chris have come a long way since the beginning of the series and they're now all proud to announce their relationship to anyone who cares to listen. They are head over heels in love so although they can't all get married legally they still want to have a ceremony to celebrate their relationship and their love for each other. Not everyone is quite so happy about their wedding though and one guest in particular has only accepted their invitation because they want to stop the ceremony from going ahead. So will this be the wedding that the triad has been dreaming of or will it all end in disaster?

I really enjoyed this final book in the series, I don't want to say too much about what happens at the wedding or how things turn out but I will say that some characters I've had low opinions of in the past really turned things around here. It's not all smooth sailing but I was really happy with how everything came together at the end and it was great to see so many happy couples. My only minor niggle is that we didn't get anything from Hilary or Liam's perspective. Their relationship has been almost as front and centre as the triad for most of the series so although they appeared in this book I was really hoping we'd get to hear where they're at in their relationship in their own words. It would have been so easy to just have a scene with them reminiscing about how far they've come together while sharing a dance at the wedding or something and that would have been hugely satisfying.

I'm going to give a slight warning to people who are planning on reading the Stronghold series after this and say if you don't like spoilers then I'd recommend reading the first four Venus Rising books, followed by the Stronghold series and then finish out with Venus Wedding. Only because all the previously single characters we met in the other books are now loved up and in relationships of their own (that occurred during the Stronghold books) so I now know who everyone is going to end up with. It's not really a major spoiler though as you can get that information just from reading the blurbs so as long as that's not something that will bother you feel free to go ahead with this book first.