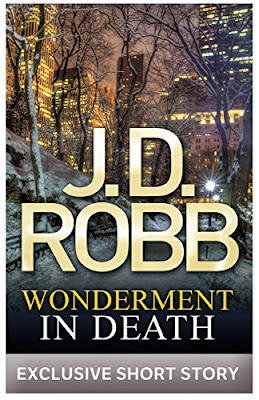 New York, 2061. Darlene Fitzwilliams - a young heiress - kills her brother then jumps from a tall building. All the evidence suggests a tragic but familiar murder/suicide case for Lieutenant Eve Dallas.

But when Eve discovers that Darlene has been visiting psychics and spiritual healers, things take a dark and unsettling turn. Someone has been meddling with Darlene Fitzwilliams' subconscious - someone with a gift for hypnosis and a disturbing obsession with Lewis Carroll's Alice in Wonderland.

With husband Roarke and partner Peabody at her side, Eve finds herself falling down the rabbit hole into one of the strangest investigations of her career. One that threatens not just her body, but her mind...

Review:
Eve's latest case appears to be open and shut murder suicide, a young woman stabbed her brother to death and then immediately jumped off of the balcony killing herself too. However Louise and Charles were friends with the siblings and they're both convinced that there is no way Darlene would do this so Eve decides to take a closer look. It turns out that Darlene has been visiting psychics to try and cope with the deaths of both her parents and it looks like someone has been messing with both her mind and her body by administering psychotropic drugs. Eve has a killer on her hands and she's not going to let them get away with it.

What I love about the In Death novellas is that they're always a little creepier than the main novels and tend to edge into supernatural territory. Not only do we have a psychic who actually has some real kind of ability to brainwash his victims but he's also obsessed with Alice in Wonderland and determined to take Eve on a trip down the rabbit hole. I'm a huge Alice fan so I loved those elements to the story and I particularly enjoyed it when Eve and Peabody accidentally expose themselves to the same drugs that were used to control Darlene. Luckily they knew what to expect and had backup on hand to make sure they were okay but it didn't make their reactions any less funny.

Wonderment in Death was another fun instalment to the series.