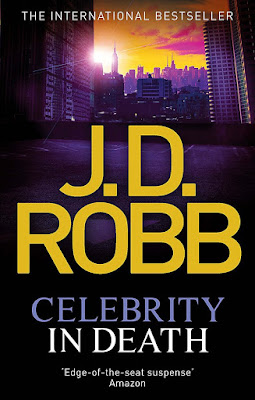 'We've got a corpse that looks like one of the investigators, a houseful of Hollywood and a media machine that's going to eat it like gooey chocolate.'

Lieutenant Eve Dallas is panicking - and she's not at a crime scene. Forced to attend a celeb-packed party for a new movie based on her most famous case, she is surrounded by actors who look like everyone in her life. Then brutal reality crashes through the sparkly facade.

There's been a murder.

The obnoxious actress playing Eve's partner, Peabody, has been found face down in the rooftop pool. It's hard to find anyone who didn't have a motive for killing her, but Eve must fight to keep a clear head and stop a calculated killer.

Review:
Being forced to attend a dinner party with a bunch of celebrities is not really something Eve is excited about, especially if the celebrities in question are all actors playing herself and her colleagues in a movie about the Icove case. It's disconcerting being surrounded by lookalikes for all the major people in her life but when fake Peabody is murdered she finds herself back in familiar territory. The actress was particularly unlikeable and pretty much everyone involved in the movie had good reason to hate her but there's only one killer in the room and Eve will stop at nothing to bring them to justice.

Celebrity in Death is yet another fab instalment to the In Death series. I've raved about these books so much in the last couple of months that I'm sure there's absolutely nothing new I can say here but at the risk of repeating myself we have another fantastic mystery, a horrible victim who still deserves justice, fab moments with all of our favourite characters (Peabody and McNab were outstanding in this one!) and my favourite power couple were on top form as always.

I can't quite believe how much I'm still loving this series. Every time I pick up one of these books I devour it in one sitting and then I'm counting the days until I can start reading the next one. I think I might be addicted but I'm definitely not going to complain! Now bring on the next book :)