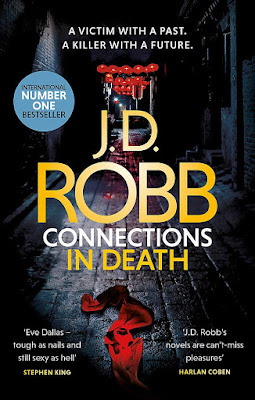 When recovering drug addict Lyle Pickering is found dead of an overdose, it looks like a tragic accident. But his sister Rochelle knows better, and so does Lieutenant Eve Dallas. Lyle was murdered, and the evidence points directly to his old street gang.

As Eve and husband Roarke track the killer through the city's dive bars, drug dens and strip joints, another body is discovered. With connections growing between the living and the dead, and the body count on the rise, Eve knows she needs to close this case fast, before the killer's lust for power turns the city's streets into a bloodbath.

Review:
When a recovering addict dies of an apparent overdose it should be simple to label it a case of accidental death and move on. But the victim's sister is convinced her brother wasn't using and from the evidence Eve is inclined to agree. As the bodies start piling up Eve soon finds herself trying to prevent an all out gang war.

The reviews for Connections in Death seem to be a bit hit and miss but I really enjoyed it. I know exactly what I'm going to get when I pick up a book in this series, there are certain things that happen in every book and I'm totally happy with that because it's become a total comfort read. I love the relationships between the all of the different characters, Roarke is a favourite book boyfriend but I also want to be friends with Eve, Peabody and Nadine and I want to have a cup of tea with Doctor Mira and listen to her words of wisdom.

J.D. Robb always keeps things fresh as far as the mystery goes so while I'll admit Eve figured things out pretty quickly in this book I still enjoyed the police procedural side of the story. I love seeing Eve and Peabody interviewing suspects too, especially when Peabody is allowed to go all out and play bad cop for a change.