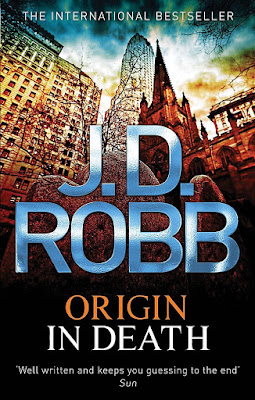 The sickness came into the center of her belly and lay there like a tumor. They've been cloning girls. Not just messing with DNA. But creating them. Selling them.

The world famous cosmetic surgeon, Dr Wilfred Icove, has been found dead - a cold, brutal scalpel to the heart. He is a man with nothing to hide, but when Lieutenant Eve Dallas exposes Dr Icove's patient records, a distressing image appears.

Eve's trail leads to an exclusive boarding school for girls. A strange, isolated place where everything seems perfect. A little too perfect. And when the main benefactor turns out to be a genius geneticist, Eve readies an attack.

With the girls nearing perfection and the men nearing insanity, Eve suspects something truly horrifying is happening . . .

Review:
When Eve is brought in to investigate the murder of a world famous cosmetic surgeon a first look into his background shows a man with nothing to hide. But Eve thinks his records are too clean, there is something off about the doctor and she is determined to get to the bottom of it. Things only get more complicated when the doctor's son, who happens to also be his colleague, is also found killed. Now Eve is working against the clock trying to track down a murderer before anyone else dies.

I have to say I think Origin in Death was probably the creepiest book in the series so far. Dr Icov and his son have been breaking all kinds of laws when it comes to genetic manipulation and cloning and the results are horrendous to think about. I think what makes it worse is that in a lot of ways we're probably not far off some of the technology they were using and it's not at all difficult to imagine some awful megalomaniacs going off the books trying to create the perfect woman just like these doctors have been. We all know that slavery and trafficking goes on today and it's not hard to imagine evil people using technological advances to find new ways to abuse others.

Anyway, what I loved most about this story was seeing a different side to Eve, we all know she's an expert at catching killers and she's not unwilling to cross the occasional line to make sure that happens but here we see her searching for proper justice for the people involved in the conspiracy. Eve, Peabody and the rest of their team potentially put their own careers in jeopardy to protect the innocents in this whole mess and for the first time that might mean not putting a murderer behind bars.

While this story was quite dark we still had plenty of humour added thanks to the arrival of Roarke's family who have come to New York to celebrate thanksgiving. Neither Roarke or Eve quite know what to do with a family so they're both a bit unsure of themselves and it was hilarious seeing them both try to figure out how to cope with an Irish invasion. I really like seeing them out of their comfort zones and I think it's great that they've both been welcomed into Roarke's family with open arms. They had already started to build a close knit group of friends but that is expanding even more with the latest arrivals. In case it wasn't obvious I'm still loving this series and can't wait to dive into the next book!