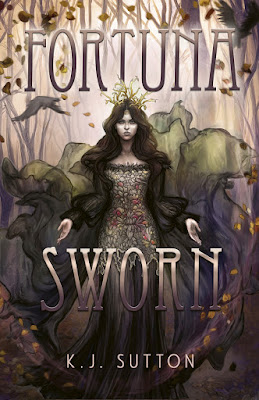 We were meant to be seductive. We were designed to lure humans in.

Fortuna Sworn is the last of her kind.

Her brother disappeared two years ago, leaving her with no family or species to speak of. She hides among humans, spending her days working at a bar and her nights searching for him. The bleak pattern goes on and on... until she catches the eye of a powerful faerie.

He makes no attempt to hide that he desires Fortuna. And in exchange for her, he offers something irresistible. So Fortuna reluctantly leaves her safe existence behind to step back into a world of creatures and power.

It soon becomes clear that she may not have bargained with her heart, but her very life.

Review:
Fortuna Sworn has been searching for her brother ever since his disappearance two years ago but there have been no clues and even a witch using magic spells has been unable to uncover his location. Then along comes Colith, a powerful faerie who says he can take Fortuna to Damon but only if she'll agree to his bargain. She knows making a deal with the fae is asking for trouble but if there is even the slightest chance of rescuing her brother and bringing him back home then she will take any risk, even if it may cost her her own freedom.

This is the first book in a new series by K.J. Sutton and it does a great job of introducing the characters and the world. Fortuna has abilities that I've not come across before which makes her a really interesting character and I loved how determined she was to save her brother. She does make some questionable decisions because she is so desperate but that just made her seem more realistic, I hate it when characters are perfect right from the beginning of a series because it means they have no room for growth so Fortuna worked really well for me.

We also meet a lot of other interesting characters along the way. Colith is keeping a lot of secrets which makes it very hard to trust him but I do find him intriguing and I want to learn more about his past and exactly what his plans for Fortuna are. My personal favourite was Oliver but it's really hard to say much about who he is or what role he plays without giving spoilers, I'll just leave it that he's a really nice guy and I'm 100% convinced that we haven't even started to scratch the surface of his character. I'm also really intrigued by Laurie, especially after the revelations at the end.

The world building is interesting, we have the Seelie and Unseelie Courts which are fairly standard in any book about the fae but K.J. Sutton has put her own twist on things that I think will have interesting implications as we learn more in future books. I'm definitely curious to see where the series goes from here and I'm looking forward to spending more time with these characters.