Review: When a Marquis Chooses a Bride - Ella Quinn 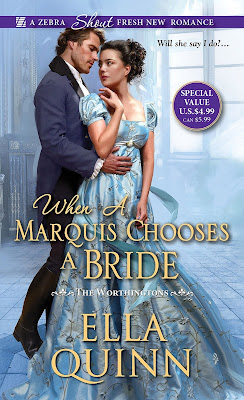 Thanks to their large extended family and unconventional courtship, the Worthingtons have seen their share of scandal and excitement. But nothing has prepared them for this...

The Dowager Lady Worthington isn t quite sure what to make of country-girl Dorothea Stern. As the granddaughter of the Duke of Bristol, Dotty is schooled in the ways and means of the nobility. But her sharp wit and outspoken nature has everyone in a tizzy. Especially their cousin, Dominic, the Marquis of Merton.

Prematurely stuffy, Dom was raised by his cheerless uncle to be wary of a host of things, including innovation, waltzing, and most perilous of all: true love. Still, there s something about Dotty, beyond her beauty, that Dom cannot resist. But the odds are against him if he intends to win her as his bride. Will he choose loyalty to his family or risk everything for the one woman he believes is his perfect match...

Review:
This is the second book in the Worthingtons series and I have to admit I wasn't too sure I'd like it when I found out that Marcus's stuffy and pompous cousin Dom was going to be the hero. I wasn't at all likeable in the first book so I was a bit wary going in but happily he's a totally different man once you get to know him and the reasons for his past behaviour soon becomes clear. After the death of his father Dom was raised by his uncle who quite frankly was a terrible person who was far more interested in the family wealth and status than anything else. His constant digs and browbeating really wore Dom down and turned him into the man we met in the first book.

When Dom meets Dotty, the young friend of his cousin who is staying with the Worthingtons for the season so she can come out alongside Charlotte and Louisa, his world is turned upside down. Dotty is softhearted and has a habit of collecting strays both of the animal and human variety. She always sees the good in people and does her best to make the world a nicer place. Although she can be a little naive she's just so sweet and everything about her challenges Dom and his narrow view of the world. This is definitely a case of her helping him to be a better man and I enjoyed seeing the changes in him as he let go of the stuffy exterior he has spent years hiding behind.

I enjoyed the romance but I also enjoyed the suspense side of the story. Dotty's habit of trying to save people put her in danger a couple of times but she was able to change so many lives for the better because of her caring nature. This series has been really fun to read so far, it was great to catch up with Grace and Matt and I'm definitely looking forward to seeing both Charlotte and Louisa find their matches too.