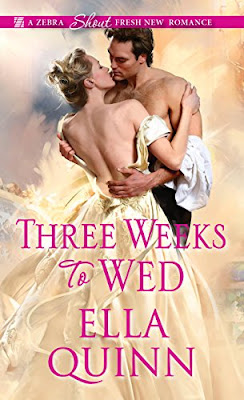 In the first book of her dazzling new series, bestselling author Ella Quinn introduces the soon-to-be Earl and Countess of Worthington--lovers who have more in common than they yet know. The future promises to be far from boring…

Lady Grace Carpenter is ready to seize the day--or rather, the night--with the most compelling man she's ever known. Marriage would mean losing guardianship of her beloved siblings, and surely no sane gentleman will take on seven children not his own. But if she can have one anonymous tryst with Mattheus, Earl of Worthington, Grace will be content to live out the rest of her life as a spinster.

Matt had almost given up hope of finding a wife who could engage his mind as well as his body. And now this sensual, intelligent woman is offering herself to him. What could be more perfect? Except that after one wanton night, the mysterious Grace refuses to have anything to do with him. Amid the distractions of the Season he must convince her, one delicious encounter at a time, that no obstacle--or family--is too much for a man who's discovered his heart's desire…

Review:
When Lady Grace Carpenter's parents died she fought hard to gain custody of her seven younger siblings until one of her brothers was old enough to take control of their family estate. No other family members were willing to take all of the children on so it was the only way to keep them all together and Grace felt it was her duty to protect them all. She knew that she was giving up the chance of having a family of her own as it would be very unlikely she'd be able to find a man willing to take on her and seven children. When she is caught in a storm and forced to spend a night in an inn with her teenage crush she decides that even if she can never marry she can at least have one night of passion to remember for the rest of her life.

Mattheus, Earl of Worthington, has decided it is time to settle down. His friends have all started to marry and seeing them start families of their own has made him consider his own future. After one unforgettable night with Grace he decides he's found the perfect woman for him but unfortunately Grace did a disappearing act before he even woke up. Now the search is on and he's not going to give up his quest easily, no matter how stubborn Grace is or how much extra responsibility her siblings will be.

Three Weeks to Wed was my first book by Ella Quinn but it was such a fun read that it definitely won't be my last. I don't tend to read a lot of historical romance but sometimes I'm just in the mood for something warm and light hearted and this series hits that spot perfectly. I thought Grace was a great character, she has worked so hard to protect her siblings and she put her own life on hold to do it without ever begrudging them for it. She loves them all dearly and wants to honour her parents too. I loved the relationship between all the brothers and sisters and that they loved her as much as she loved them, they want the best for her too and when they realise Matt is courting her they decide to do whatever it takes to bring the couple together.

Matt already has four younger siblings of his own that he's responsible for so he's quite shocked when he realises marrying Grace would bring the brood up to eleven. I liked that he took time to think about the affect that would have on all of their lives before continuing to pursue Grace, but equally that it didn't take him too long to decide that she was worth it. Matt and Grace made a really cute couple and they had an intense connection that they both struggled to resist but they also had a lot of shared values and family was important to them. It was fun seeing Matt learn to deal with all of the children but I also really liked seeing the siblings from both families decide to help Matt and Grace blend their two families together.

This was a sweet romance with lots of humour and just a tiny amount of suspense. I liked the fact that it was relatively drama free and that there were no big misunderstandings or stupid arguments. I'm definitely looking forward to reading the next book in the series.