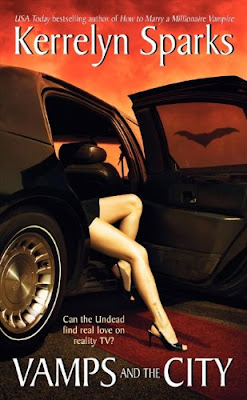 Who says a vamp can't have it all?

Darcy Newhart thought it was a stroke of genius--the first-ever reality TV show where mortals vie with vampires for the title of The Sexiest Man on Earth. As the show's director, Darcy's career would be on track again. And she can finally have a life apart from the vampire harem. Okay, so she's still technically dead, but two out of three's not bad. Now she just has to make sure that a mortal doesn't win. If only she wasn't so distracted by a super-sexy and live contestant named Austin...

But Darcy doesn't know the worst of it. Austin Erickson is actually a vampire slayer! And he's got his eye on the show's leggy blond director. Only problem is, he's never wanted any woman--living or dead--as badly. But if he wins her heart, will he lose his soul? And if it means an eternity of hot, passionate loving with Darcy, does that really matter anyway?

Love at Stake Series:
How to Marry a Millionaire Vampire
Vamps and the City
A Very Vampy Christmas (Novella)
Be Still My Vampire Heart
The Undead Next Door
All I Want for Christmas Is a Vampire
Secret Life of a Vampire
Forbidden Nights with a Vampire
The Vampire and the Virgin
Eat Prey Love
Vampire Mine
Sexiest Vampire Alive
Wanted: Undead or Alive
Wild About You
Vampires Gone Wild (Novella V is for VampWoman)
The Vampire With the Dragon Tattoo
How to Seduce a Vampire (Without Really Trying)
Crouching Tiger, Forbidden Vampire

Review:
Although I enjoyed the first book in this series I had serious reservations about the way Roman's vampire harem was described. They're all vampire women who are hundreds of years old but they act like idiotic teenagers constantly cat fighting amongst themselves and belittling other women. Even worse is the fact that they are simply incapable of making a single decision for themselves and are totally reliant on a man for every single part of their lives. The old male vampires in this series are all warriors or scientists, men who have embraced modern society and technology while the women are totally stuck in the past when women were just supposed to be pretty ornaments there to do whatever their husbands told them to. I HATE this sexist attitude and I absolutely hate that more often than not it is women who continue to perpetuate it.

You may wonder why I'm ranting about problems I had with the first book in this review so I'll point out that the vampire harem have a HUGE part in the sequel. To be honest if I'd known that going in I probably would have been reluctant to read Vamps and the City at all but I prefer not to read blurbs for books in ongoing series. The main focus of this book isn't the romance between Darcy and Austin, it's about a reality show for vampire TV where the women of the vampire harem are judging a competition to find the sexiest man on earth, the "lucky" winner doesn't just come away with a million dollar prize they also get to become the proud new owner of Roman's rejected harem of women. Just excuse me while I vomit at the thought of it! As if that wasn't bad enough the women choose the most ridiculously shallow things to judge the men on, looks, strength, chivalry, wealth etc. Nothing about being a nice person with a good sense of humour or anything else for that matter. The whole reality show part of this book (which gets more page time than ANYTHING else) was offensive and insulting and any humour that the author was trying to achieve flew straight over my head and missed the mark completely. The only good thing I can say about the book is that the women did start to rethink their lives and consider the possibility of independence. It came too late to save the story but it did give me a tiny glimmer of hope for the future.

To make it worse I didn't particularly like either of the main characters. Darcy had been through a tough time after being turned into a vampire without giving her permission, but it was done to save her life after she had been attacked and she had a pretty good life now even if it wasn't the life she expected but she was just so whiney and ungrateful for everything. I hated her woe is me attitude and just found her really difficult to connect with. Austin was a member of the CIA vampire slaying team and he'd gone undercover as part of the reality show trying to get details of more vampires so his team could kill them all afterwards. I hated the way he treated Darcy and I actually have a lot of problems with the whole CIA vampire slaying team too. Are you seriously telling me that they would have knowledge of where a whole bunch of vampires were spending their days and yet they wouldn't try to stake them all while they slept? Also, since the vampires were aware he was there undercover why the heck didn't they have security at the penthouse to prevent that from happening? Not only do we have ridiculously stupid bad guys but the good vampires are idiots too.

I think it's pretty obvious that I didn't enjoy this story much. I'm actually pretty surprised I even finished reading it. I have friends who tell me later books in the series are really good but I'm honestly not sure I want to continue reading it. I'll give it a few months and see if I change my mind though.