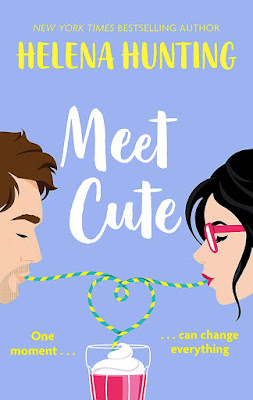 The New York Times bestselling author of Pucked and The Good Luck Charm delivers a Hollywood happily-ever-after where a famous heartthrob falls for his ultimate fangirl in this sexy standalone romantic comedy.

A total disaster? Or the start of something special?

Kailyn Flowers was always calm and controlled - until she ended up sprawled all over Daxton Hughes, the former actor she totally crushed on as a teenager. In seconds, she became a mortifying fangirl and oddly enough, he didn't run away. Instead, their meet cute led to something she never expected: a friendship. Of course, she never expected him to betray her, either . . .

Eight years later, Dax needs Kailyn's help. Years of anger towards him haven't exactly left Kailyn inclined to oblige, but she also isn't heartless enough to turn him down. She vows to be friendly, but soon their 'friendly' meetings turn into flirty dinner dates, and Kailyn can feel their chemistry is as explosive as ever. But how can she possibly let down her guard again to a guy who has heartbreak written all over him?

Review:
Kailyn is mortified when she literally trips over the actor she had a childhood crush on on their first day of university and makes a total fool of herself. Embarrassment fades as the two enjoy a playful rivalry as they both compete to come out top of the class. Kailyn believed that Daxton was her friend and that's why his betrayal cut so deep. Now, eight years later they are thrown into each other's orbits when Kailyn is put in charge of his thirteen-year-old sister Emme's trust fund. After the deaths of his parents Daxton is determined to do whatever it takes to protect Emme but caught in the middle of a bitter custody dispute with his aunt he's going to need Kailyn's help to keep Emme with him.

Meet Cute was a really fun and light hearted contemporary romance, the first meeting between Kailyn and Daxton was hilarious and they continue to have multiple fun encounters throughout the book. Kailyn has believed for years that Daxton cheated her out of the top spot in class but eight years later when she finally confronts him about it she realises things weren't quite what they seemed. Now she's determined to focus on helping Daxton gain full custody of Emme but the more time they spend together the more she falls head over heels for both of them.

Daxton has a lot on his plate but he always had a bit of a thing for Kailyn and was hurt when she disappeared on him. Obviously the timing for them getting back in contact couldn't be worse, not only is he struggling with his own grief he also finds himself trying to parent a grieving teenage girl and the two of them are both floundering. His aunt, who should be the person they can turn to for help, is making things worse by accusing him of not looking after Emme properly but he's sure she has other motives for wanting custody.

I enjoyed the romance between Kailyn and Daxton, there was one misunderstanding towards the end that made me want to smash their heads together but luckily it didn't take too long for them to figure things out thanks to Emme's interference. I'm not always a fan of kids in romance books but I thought Emme was a great character, she was pretty sweet most of the time and the three of them made a nice little family together. If you're looking for a fast and fun read that will leave you with a smile on your face then you can't really go wrong with this one.