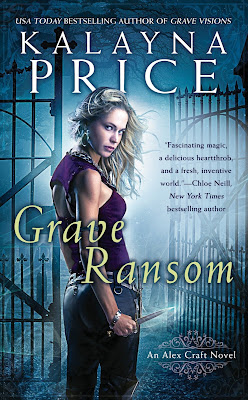 The Grave Witch is about to find herself face-to-face with the walking dead . . .

Grave witch Alex Craft is no stranger to the dead talking. She raises shades, works with ghosts, and is dating Death himself. But the dead walking? That's not supposed to happen. And yet reanimated corpses are committing crimes across Nekros City.

Alex's investigation leads her deep into a web of sinister magic. When Briar Darque of the Magical Crimes Investigation Bureau gets involved, Alex finds herself with an unexpected ally of sorts. But as the dead continue to rise and wreak havoc on the living, can she get to the soul of the matter in time?

Review:
I've been a fan of this series for a long time now so it pains me to say that this book was a bit on the disappointing side. It wasn't awful by any means but it definitely wasn't the high standards I expect from this series. To start with the positives I did really enjoy Alex's latest investigation. Things get really complicated for her when she is a witness to a bank robbery and realises that the robbers are already dead. She's seen a lot of things in her life but walking corpses isn't one of them and it looks like she's facing a dangerous opponent this time.

I always enjoy seeing Alex work a case and previously I've liked Briar from the MCIB but this time I really struggled with her. Briar is totally willing to throw Alex under a bus, she doesn't care how much danger her actions put Alex and her friends in as long as it gets her closer to the bad guy. She can't even be bothered to give Alex a heads up about her plans so that Alex can prepare herself for what's coming. Poor Alex finds herself constantly getting put in harm's way throughout this story and she's also constantly apologising for things that aren't her fault.

I'm also really struggling with the love triangle, I was honestly hoping that by book 5 we'd have more of an idea where the romance was going but so far things are just going from bad to worse. I hate that we still know so little about both Death and Falin, they both have commitments that prevent them from prioritising Alex and that is understandable but it's starting to bore me now. I've never really felt the attraction towards Falin but where I've been totally team Death right from the beginning in this book I ended up feeling ambivalent towards him too which was just sad.

I do still have a lot of love for these characters though so I'm really hoping that this book was just a blip and that the next one will be back to the highs of previous instalments.