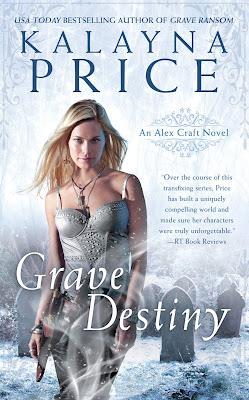 Grave witch Alex Craft can speak to the dead, and that makes her a dangerous enemy for anyone with something to hide. . . .

Alex is still trying to come to terms with her changing powers and her growing ties to Faerie when a case she'd rather avoid falls right into her lap. A fae prince desperately needs Alex to investigate a politically sensitive murder. She reluctantly agrees to the case, taking FIB agent Falin Andrews along as her backup.

But as Alex begins to delve into the mystery, she realizes that the intricate web of alliances and intrigue in the Faerie courts is strained to its limits. War is about to break out, one that threatens to spill over into the mortal realm. This murder is tied right to the center of centuries-old arcane unrest, and if Alex isn't careful she may follow the twisting path ahead of her right into her grave end.

Review:
This isn't the first time that Alex has been asked to investigate a murder that happened in Faerie but this time the potential consequences are all out war between two of the courts so the stakes have never been higher. When it appears that a member of the Shadows has murdered a Winter Court noble tensions between the two reach breaking point. Dugan comes to Alex for help as he wants to prevent a war and along with Falin the three begin a difficult investigation, it quickly becomes clear that not all is as it first appears and they need to get to the bottom of the conspiracy fast if they want to prevent any further deaths.

I've been a fan of the Alex Craft series for years now and I really enjoyed learning more about Faerie and Alex's magical planeweaving abilities in this instalment. Alex, Falin and Dugan have to visit multiple Faerie courts during their investigation and this was the first time we really get to find out more about the other rulers and how their courts are run. This story had a lot of action and there were some really great developments for certain characters that are going to have a huge knock on affect as the series continues.

It also looks like we finally have a resolution to the love triangle (or should that be square since Dugan was also a potential suitor?). I'm not sure I love the way it's been resolved, personally I think a certain character's potential was wasted by the way things were handled in the last book which was really disappointing, but I at the same time I was fed up with the dithering so I'll be pleased if Alex has made a decision and sticks to it. I'm not convinced the best man won although his character has grown on me so hopefully I'll come round to the idea eventually.

Completely disregarding my feelings about the romance I'm very happy with the way this series is going, I like that Alex is starting to come into her Fae heritage and learn more about her magical abilities and I really love that she's starting to make a name for herself in Faerie as someone who shouldn't be crossed lightly. I'm desperate to know more about her parents too and hope we'll see more of the different courts in the next book.