Today I wanted to spotlight Kingdom of Exiles, Maxym Martineau's debut novel. I've been wanting to read this book ever since I first heard about it (watch out for my review coming very soon!) and today it's finally out in the world for everyone to enjoy. Just have a look at this blurb and tell me it doesn't sound fantastic!! 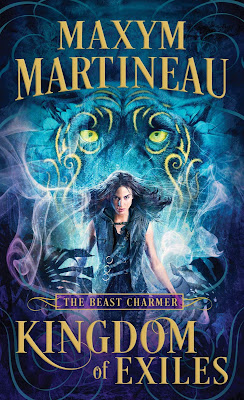 Assassin's Creed meets Fantastic Beasts and Where to Find Them in this gripping, epic fantasy romance trilogy.

My heart wasn't part of the deal when I bargained for my life,
But assassins so rarely keep their word.

Exiled Charmer Leena Edenfrell is running out of time. Empty pockets forced her to sell her beloved magical beasts-an offense punishable by death-and now there's a price on her head. With the realm's most talented murderer-for-hire nipping at her heels, Leena makes Noc an offer he can't refuse: powerful mythical creatures in exchange for her life.

Plagued by a curse that kills everyone he loves, Noc agrees to Leena's terms in hopes of finding a cure. Never mind that the dark magic binding the assassin's oath will eventually force him to choose between Leena's continued survival...and his own.