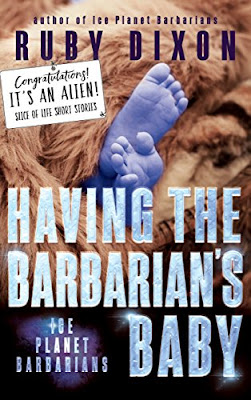 Megan’s ready to give birth, but she’s not ready to let her mate leave her side. When Cashol must go hunting to feed the tribe, they’re separated for the first time since resonance. Not a problem, except the baby’s ready to be born and there’s a storm brewing…

This is a short story set in the ICE PLANET BARBARIANS world. It does not stand alone, and is intended to be read after BARBARIAN’S MATE. It’s a little bit of sweetness for those that can’t get enough of the big blue aliens! Happy reading!

Review:
Having the Barbarian's Baby is a short story in Ruby Dixon's Ice Planet Barbarians series and it gives us a chance to get to know two of the side characters Cashol and Megan. They're already mated and Megan is heavily pregnant, due to give birth any day now, so this isn't about the start of their relationship but it does give us some insight into day to day life in the cave.

I did really like Cashol, he was so attentive and protective of Megan and he went out of his way to make life as easy for her as possible but unfortunately I ended up feeling like he was totally wasted on such an awful heroine. Megan drove me bonkers, she was so clingy that Cashol wasn't even allowed to leave the cave to go and hunt for food. This is at a time when their cave has far more people than ever before with the addition of all the human women, not to mention the number of new babies that are on the way. They're approaching winter, food stores are already critically low and this is a planet where winter can be deadly. They need every single capable person out there bringing back as much food as possible or literally the entire population is at a very real risk of starving yet Cashol can't go further than 5 feet from Megan without her having a total meltdown. It might have been more understandable if he would be leaving her totally alone but she was in a cave full of people!

Megan totally ruined this story for me. It was great to catch up with other characters but I ended up feeling sorry for Cashol, he really struck out when his cootie chose Megan as his mate!