Review: The Match of the Century - Cathy Maxwell 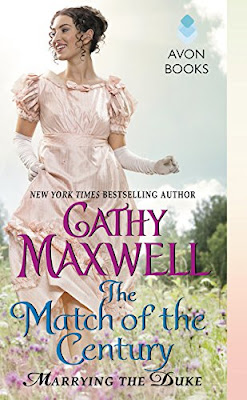 In New York Times bestselling author Cathy Maxwell's glittering new series, wedding bells are ringing… until the return of a rake throws a bride's plans— and heart—into a tailspin

Every debutante aspires to snag a duke. Elin Morris just happens to have had one reserved since birth. But postponements of her marriage to London's most powerful peer give Elin time to wonder how she will marry Gavin Baynton when she cannot forget his brother, Benedict.

Already exasperated at being yanked from the military to meet "family obligations," now Ben must suffer watching his arrogant sibling squire the only woman he has ever loved. Joining the army saved Ben from sinking into bitterness, but seeing Elin again takes him back to the day they surrendered to their intoxicating desire.

As the wedding draws near, Elin tries to push Ben far from her thoughts. When danger brings them together, there is no denying their feelings. But can Elin choose love over duty...?

Marrying the Duke Series:
A Little Thing Called Love (Novella)
The Match of the Century
The Fairest of Them All
A Date at the Altar

Review:
Most young ladies would be thrilled to be engaged to a Duke and Elin has had her entire life to prepare for it since her parents arranged the match when she was just a baby. Her parents are thrilled that their grandson will be a Duke but Elin is a little more hesitant, it's not that she doesn't like Gavin, it's more the fact that she's in love with his younger brother Benedict. Elin and Ben grew close as children and fell in love as teens, Elin was convinced that they would defy their family's expectations and marry each other but then suddenly one day Ben left to join the army without a word. She was heartbroken when he left and resigned herself to marrying Gavin but then just when the official announcement is due to be made Ben returns home and all of Elin's old feelings come rushing back.

The Match of the Century was a fast and fun read that I devoured in a couple of hours. Elin and Ben had a complicated history, mainly due to the fact that Elin thought he abandoned her while Ben thought Elin had betrayed him, so their romance isn't an easy one. Ben resents the fact that his older brother seems to get everything, Gavin was their father's golden child while Ben was just the spare, Gavin has the title, the wealth and most importantly he's due to marry the only girl Ben ever loved. It's put a huge wedge between them, especially when Gavin forces Ben to return home from the army so that he can learn how to run the family estate just in case anything happens to his brother.

Elin desperately wants to please her parents, her father is a made man who is obsessed with the idea of having a Duke for a grandson and cementing the family's place in society so he would be horrified if Elin didn't go through with the wedding. But she doesn't love Gavin and suspects that he doesn't love her either, her parents had a love match and she's always dreamed of having a relationship like theirs but she doesn't know how to make it happen.

This book has a heartwarming romance alongside a little action and danger which kept me on my toes waiting to see what would happen next. I thought that Elin and Ben were a really cute couple but I have to admit I did feel a little sorry for Gavin who desperately wants a family of his own. I'm definitely looking forward to continuing the series so I can see him get his own HEA.