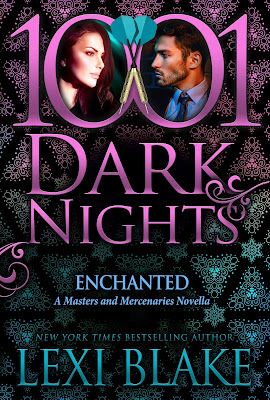 Sarah Stevens’s life is pretty sweet. By day, she’s a dedicated trauma nurse and by night, a fun-loving club sub. She adores her job, has a group of friends who have her back, and is a member of the hottest club in Dallas. So why does it all feel hollow? Could it be because she fell for her dream man and can’t forgive him for walking away from her? Nope. She’s not going there again. No matter how much she wants to.

A prince of the silver screen

Jared Johns might be one of the most popular actors in Hollywood, but he lost more than a fan when he walked away from Sarah. He lost the only woman he’s ever loved. He’s been trying to get her back, but she won’t return his calls. A trip to Dallas to visit his brother might be exactly what he needs to jump-start his quest to claim the woman who holds his heart.

A masquerade to remember

For Charlotte Taggart’s birthday, Sanctum becomes a fantasyland of kinky fun and games. Every unattached sub gets a new Dom for the festivities. The twist? The Doms must conceal their identities until the stroke of midnight at the end of the party. It’s exactly what Sarah needs to forget the fact that Jared is pursuing her. She can’t give in to him, and the mysterious Master D is making her rethink her position when it comes to signing a contract. Jared knows he was born to play this role, dashing suitor by day and dirty Dom at night.

When the masks come off, will she be able to forgive the man who loves her, or will she leave him forever?

Review:
Jared and Sarah have a very complicated history, they fell in love but Jared walked away from her during a particularly terrible moment in both of their lives. He had good reasons for leaving but Sarah still finds it very hard to forgive him for abandoning her. Now, just as they started to reconnect for the first time in months, Sarah has been given some pretty devastating news and it's her turn to pull away from him. Jared isn't willing to let her leave without giving him some answers though, he knows she loves him and he wants them to build a future together so he's determined to figure out why she is holding back and prove that they can work through anything as a couple.

I think Jared and Sarah are characters that have already made an appearance in previous books of the Masters and Mercenaries series but I'm not quite up to date with the series yet so they were new to me and it didn't lower my enjoyment of this story at all. I really enjoyed getting to know both of them and it was also great to spend time with so many other familiar faces at Sanctum. These two have a very messy history that I don't really want to go into too much detail about in my review. Suffice to say they've been through a lot and the fallout from a certain event has had a massive impact on Jared's life and his career. He needed time to get his head together before coming back for Sarah but even though he knows he loves her he is still worried about bringing his baggage back into her life.

For her part Sarah is keeping a big secret, I'd actually guessed what it was pretty early on but again I don't want to give spoilers here. It was something that had a huge impact on her both mentally and physically though and I thought the whole situation was written incredibly well. It was so easy to put yourself into Sarah's position and understand exactly what she was going through.

The story mainly centres around a party weekend thrown at Sanctum to celebrate Charlotte Taggart's birthday. Jared is determined to win Sarah back but she's refusing to take his calls so he decides to go in disguise. I'll admit I'm always a little worried when I see a story that involves hiding a main character's true identity from someone because it can skate along the lines of non-consensual if the other person wouldn't agree to the situation if they knew who they were really involved with but that wasn't an issue at all here. Sarah almost immediately figures out who Master J really is so although Jared thinks he's hiding from her in reality she's fully aware of the situation.

The two have absolutely fantastic chemistry but the most important part of their story is the emotional connection. I also loved that it wasn't just about the two of them finding each other but also about them both finding unconditional support from other members of the club. They both come to realise that their family, by choice if not by blood, is much larger than they realised and that is something that pretty much carries through this entire series. These books may be kinky and there may be a lot of sex but there's also a lot of heart and strong bonds of friendship throughout and that's one of the reasons I love them so much.