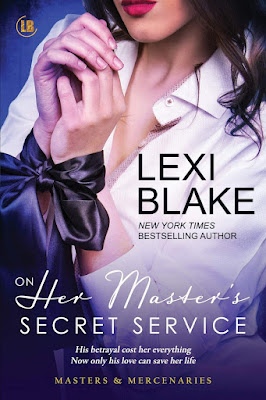 Her submission fulfilled her

When Eve St. James married Alex McKay, she had her whole life ahead of her. They were the FBI’s golden couple by day, but by night Eve gave herself over to her husband’s world of Dominance and submission filled with pleasures she came to crave.

His betrayal destroyed her

Worried for her safety, Alex left Eve behind to tackle a dangerous mission. But Alex never suspected that Eve was the real target and her security is destroyed by a madman. By the time he rescues her, his wife has been changed forever.

But when her life is in danger, he is her only hope

Unable to heal the damage, Alex and Eve are still trapped together in a cycle of pleasure and misery that even their divorce cannot sever. But when a threat from Eve’s past resurfaces, Alex will stop at nothing to save her life and reclaim her heart.

Review:
I've been looking forward to Eve and Alex's story since the beginning of this series. It's been obvious all along that there is a lot of history between them and you can see that they still love each other but even though they're in a committed Ds relationship at the club that's where their connection ends. Their marriage ended in divorce and outside the club they can barely stand to be in the same room as each other. I've been desperately wanting to know exactly what happened between them for ages now and On Her Master's Secret Service finally gives us a chance to find out.

Years ago they were married, blissfully happy and working alongside each other in the FBI but that all changed when Alex left Eve behind to hunt down a dangerous criminal. Profiler Eve warned Alex not to poke the bear but he did it anyway expecting to become a target himself. Instead Eve was taken prisoner and held captive by a sadistic madman for a week suffering all kinds of torture while Alex was left desperately searching for his wife. Alex blames himself for everything that Eve went though and ever since them he has focused all of his energy into tracking down the man who hurt her. Eve never blamed Alex for what happened but she does blame him for not being there for her after she escaped. She felt like he kept his distance because he didn't want her anymore now that she was tainted by another man and she's been hurting ever since.

It's safe to say their relationship is complicated. There's a lot of guilt and hurt between them but in spite of all that there is also still a lot of love. It's not going to be easy to get their relationship back on track though and they're both going to have to be willing to put the effort in. Then when Alex gets a lead that might finally allow him to get vengeance for Eve he risks losing everything by leaving her in the dark. But this time Eve isn't quite so willing to watch him walk away and she's going to force him to confront their past together.

I loved both of these characters, it was so easy to see things from both of their points of view so even though I was really frustrated with Alex for not being there when Eve needed him most I could see why he was struggling with his own sense of guilt and blaming himself for letting her get hurt in the first place. Seeing them both working though their issues and find their way back to each other was extremely satisfying. I enjoy the suspense side to this series but it's definitely the relationships that keep me coming back for more. I also love the camaraderie between the McKay/Taggart team. The hints we get at Ian's past have me more eager than ever to read his book so I'm really glad that the next full length book is his.