One book I feel ridiculously guilty that I've not read yet is King of Scars by Leigh Bardugo. I'm such a HUGE fan of her Grishaverse and had this book on preorder the second it popped up on Amazon so why haven't I read it nearly 8 months after it was published? I think it's partly because I was heartbroken by a certain thing near the end of Crooked Kingdom and I'm really nervous about what might happen in this book as Nina is one of the main characters. It's also partly because I have such high expectations for Leigh's books and I'm scared that it might not be able to live up to them. Anyway, I keep looking at my beautiful signed edition and thinking I really must read it but then I always make excuses to put it to one side. Do you have any books like that on your to read shelves? 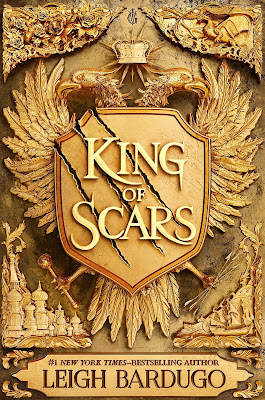 Nikolai Lantsov has always had a gift for the impossible. No one knows what he endured in his country's bloody civil war - and he intends to keep it that way. Now, as enemies gather at his weakened borders, the young king must find a way to refill Ravka's coffers, forge new alliances, and stop a rising threat to the once-great Grisha Army.

Yet with every day a dark magic within him grows stronger, threatening to destroy all he has built. With the help of a young monk and a legendary Grisha Squaller, Nikolai will journey to the places in Ravka where the deepest magic survives to vanquish the terrible legacy inside him. He will risk everything to save his country and himself. But some secrets aren't meant to stay buried--and some wounds aren't meant to heal.

If you've read King of Scars I really would love to know what you thought of it. Am I being stupid to keep putting it off? Leave me a link to your reviews to help convince me to bump it up my to read pile!
at 18:00