Review: It Started with a Kiss - Ella Quinn 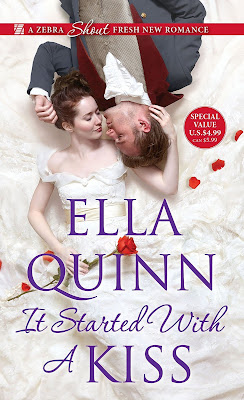 What is a young Worthington woman to do when the man of her dreams is not who she thinks he is?

This season, all eyes are on the Earl of Worthington s spirited, beautiful sister, Lady Louisa Vivers. Many gentlemen are vying for her attention in and around the ton. Yet, Louisa longs for someone who can take her beyond the ballroom a man who is worldly, adventurous, and passionate. She won t settle for just any suitor. She wants her true soul mate and she ll know him when she sees him.

Is Gideon, the Duke of Rothwell, him? The moment he and Louisa meet, they share a powerful attraction. Rides at sunrise and waltzes at dusk follow. Finally, Gideon can no longer resist the urge to embrace her, and Louisa is sure he will ask for her hand. But Gideon believes he is in no position to marry. The Rothwell estate has gone bankrupt, a scandal simmers in its wake, and he has nothing left to offer. Now, he must decide if he will let pride stand in the way of true love or if he will risk everything, and let the lady decide for herself...

Review:
It Started with a Kiss is the third book in Ella Quinn's Worthingtons series and this time it is Matt's oldest sister, Louisa, who gets her happily ever after. It may be Louisa's first season but she's had plenty of interested suitors, it's just that none of them caught her attention until she met Gideon, the Duke of Rothwell. Gideon only recently returned home after years spent living overseas, while he was gone his father managed to run their estate into the ground and now it's up to Gideon to sort things out, something that is far more complicated than he could have realised. The last thing he is looking for is a wife but meeting Louisa makes him wish his circumstances were different.

Poor Gideon has really been left a mess to deal with by his late father but as we learned more about the circumstances it was hard not to feel sorry for the old man no matter how much trouble he had caused. Gideon blames himself for being out of the country when his family needed him and now he's determined to set things right and recoup as much of his farther's losses as possible. Although he knows he's not the best marriage prospect at the moment he finds Louisa impossible to resist. People could think he's only interested in her for her money but he goes to great lengths to protect her interests and make sure he is able to sort out his financial issues on his own which just made me like him even more. They were really cute together, Louisa knows exactly what she wants and there is nothing that will stop her from claiming her man now that she's finally found him.

This was another great instalment to the Worthingtons series, these books are all light and really fun to read with sweet romances and just a hint of danger from outside sources. The couples all tend to fall for each other pretty quickly but for some reason that never bothers me and I always enjoy watching their courtships. Of course it's always nice to spend time with the rest of the family too and catch up with previous couples from the series. I also love the friendship between Louisa and Charlotte so I'm glad her book is up next.