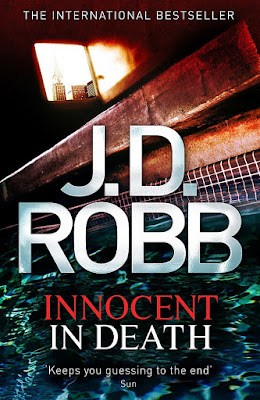 His heart began to thud, his throat to close. He tried to pull his body from the pool. 'I'll help you', his killer said. He felt no pain.

A young teacher sips a hot chocolate, blissfully unaware that his first taste condemns him to an agonising death. The community around him is devastated and suspiciously protective of their own. No one is better equipped to see through the lies than homicide Lieutenant Eve Dallas, but she is distracted by the arrival of her husband Roarke's ex-lover, an impossibly glamorous vixen, determined to steal Roarke back.

But Eve's personal life must wait when a second murder victim is found, and everyone's eyes turn to the perfect school at the heart of it all. Its secret will soon be out . . .

Review:
In this instalment Eve is tasked with investigating the murder of a popular young teacher at a private school. That's the least of her worries this time though as one of Roarke's old flames is back on the scene and she seems determined to win him back. Eve is usually pretty chilled about Roarke's exes but there is something about Magdelana that puts her back up almost instantly and for the first time she finds herself impossibly jealous and paranoid. Her head tells her Roarke would never betray her trust but her heart is running scared. For once Roarke handles things badly, he doesn't understand her jealousy and is upset by the thought that Eve doesn't trust him. Friction at home has Eve completely off her game and it makes it far harder than normal for her to solve the case.

If you've been following my blog over the last few months you'll know I've been devouring this series and I can't get enough of Eve and Roarke as a couple so it was horrible to see them going through a rough patch in this book. But at the same time I really appreciate that J.D. Robb is still managing to make their relationship fresh and interesting 24 books into a long running series. Roarke can sometimes be too good to be true so it was nice to see him make a mistake for a change even though it left me wanting to smack some sense into him. I was so angry at him for hurting Eve but at the same time I could see why he was annoyed that she didn't seem to trust him. I never doubted them as a couple though, it's obvious they're both crazy about each other and that nobody is ever going to be able to come between them no matter how hard they try.

I have to give a shoutout to Summerset in this review too because there were some fantastic scenes between him and Eve this time around. I love the antagonistic relationship they usually have but I also really like the way that when the chips are down they can actually be quite sweet to each other. I don't want to say too much about the murder in this case but I will say I was shocked and pretty horrified at who the killer was and their motives. This was definitely a surprising case that nearly got past Eve, luckily she got her head back into the game in time to solve the mystery though.