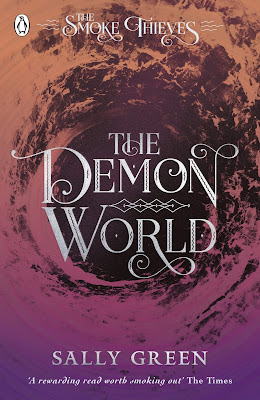 After narrowly escaping the fall of Rossarb, Princess Catherine leads a rag-tag group of survivors into the barren wasteland of the Northern Plateau.

With the Brigantine army snapping at their heels, Edyon and March become separated from the group, while demon hunter Tash leads Catherine and Ambrose to an unlikely refuge - the hidden tunnels of the demon world itself. They soon find that the tunnels hold their own dangers and, while Tash travels deeper, hoping to learn more about their mysterious inhabitants, Catherine and Ambrose must return to the surface to resume the war.

But the world above is in turmoil. King Aloysius's army has captured the Pitorian prince, Tzsayn, and is poised to overrun the whole country. To have any hope of challenging her father's tyranny, Catherine needs to form her own army, but when danger lurks at every turn, how can she tell an ally from an enemy?

What Tash discovers in the demon tunnels could change everything, but if the message doesn't reach Catherine in time, the war might already be lost . . .

Review:
With Prince Tzsayn captured by the Catherine's family Catherine, Ambrose, Tash, Edyon and March all find themselves fleeing for their lives and as the Brigantine army closes in they're forced into making desperate decisions in order to survive. As the group ends up separated once more they all have different paths to follow that are equally fraught with danger.

Sometimes the second book in a trilogy suffers from second book syndrome and ends up falling a little flat compared to the first but that definitely isn't the case with Sally Green's The Demon World. She was able to immediately draw me back into the story (no mean feat when I've read well over 200 books in between this and the last one!) and within no time at all I was totally caught up in the story. I'll admit I missed Tzsayn's character as he was absent for most of the story but I particularly loved seeing the journey Tash has been on since the beginning of the first book. She's changed so much since we first met her and is without a doubt one of the bravest characters in the series.

Catherine makes some questionable choices along the way but at the same time she proves her intelligence several times over as she overcomes obstacles thrown in her way by people who blame her for Tzsayn's capture. I love the complicated relationship she has with her devoted guard Ambrose but I have a horrible feeling he's going to end up with his heart broken because she's so ambitious.

I don't really want to get into any detail about what happens in this story so I'll just tell you there is plenty of action, we uncover some huge secrets that the Brigantines have been keeping, there are plenty of betrayals along the way, some more surprising than others, and the ending left me with my mouth hanging open in shock. I'm definitely going to be waiting on tenterhooks for the final book in the series to publish!

Other Reviews:
Vee @ Under the Mountain
If you have reviewed this book on your blog please leave a link to your review in the comments & I'll add the link here.